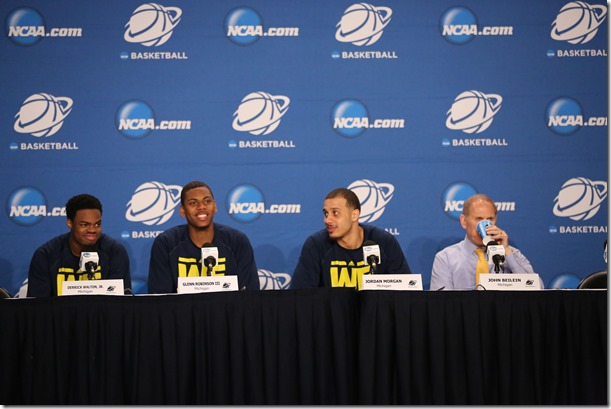 COACH BEILEIN: I saw Cuonzo going out the door. What a great job he’s done with that team. They had a sensational year. And they’ve got great ‑‑ he’s done a great job just developing the culture of that program.

So you feel bad because they worked so hard and they came back, and they are really a good team. We know we beat a good team.

Really pleased we could score points against them because they’re one of the best defensive teams in the country. Their turnovers ‑‑ when we turn it over, we don’t turn it over much, there’s a big difference in the game.

So pleased to get this win. Certainly it was a lot of drama at the end, but we’ve had a lot of that this year and a win is a win.

JORDAN MORGAN: Well, they set a screen for him to come open, so I knew that the play was going to be for him. And I just know he likes to play bully ball, he’s in a stance ready.

I don’t know. I just was there. It’s just something I do. I take charge. That’s what I do.

Q. This one is for Coach Beilein. Did you anticipate how well you would shoot the 3, and if so, how did that play into your game plan as the game went on?

THE MODERATOR: Question for Coach Beilein.

COACH BEILEIN: We shoot a lot of 3s. If you follow us you’d know that. Usually we’re going to take what they give us.

Do I anticipate Zak Irvin coming off and going three for three? I probably don’t, but I think he’s probably going two for three. But we’re going to take what people give us.

I don’t anticipate much, except I try to anticipate how they’re going to guard us and they had a great plan.

But we’re fortunate we did get some of those to drop, and we had some good drop‑offs inside to this guy as well.

Q. Jordan, walking off the court, I don’t know if you meant it for everybody to hear, but we heard you yelling “mismatch,” and I assume you’re talking about Stokes inside and you inside. Can you just talk about ‑‑

JORDAN MORGAN: We heard all week about they had mismatches and how we couldn’t guard them inside. I guess people forgot we play in the Big Ten and we won the Big Ten outright.

So we’re not really soft around here. That’s not who we are. We lift a lot of weights. So it’s just ‑‑ I don’t know, it’s a pride thing for us. We’re not about to get punked.

Q. Coach, you talked about the turnovers. I know you probably haven’t reviewed them a lot, but just kind of how much of it was what Tennessee was doing and how much was unforced mistakes on your part?

COACH BEILEIN: I can’t recall all year, so many people taking the ball off of us off the dribble and just really quick hands, where they got the ball several times.

And I would say probably six to eight of those points I think led to transition baskets.

We’re really good with the ball and really strong with it. They didn’t intercept passes, they just got us off the dribble or got us when we were driving to the basket. Did a great job.

Q. Coach, how did you assess the difference in your shooting 3‑point range first half to second half? Was that their defense, or you guys were ‑‑

COACH BEILEIN: I don’t know what we went in the second half, but I don’t look at that. We’re going to shoot well from 3 most every game. That’s the hope.

And usually when we make over 10 we’re in pretty good shape. But last year we had a great game with Michigan State we won at home, we didn’t make a 3.

Q. What frustrated you about them being able to come back and get within a point there?

COACH BEILEIN: I think the way we did it, first of all, it’s very, very hard to inbound the ball four or five times from a dead spot. I don’t care where you are on the court. You only have so many out of bounds. Only have to do that a couple of times a year ‑‑ a couple times a game, not four or five in a row.

Once we expanded the court, Glenn made the great catch on a longer one.

THE MODERATOR: Questions for the student‑athletes so we can get them back to the locker room.

Q. Glenn, this has been talked about a little bit, but what was key or what worked in getting Maymon into foul trouble and exploring that mismatch really quickly seemed like you guys went right after him?

GLENN ROBINSON, III: I tried to be strong in the post. I tried to front it when I could. Make them force tough passes into the post. And I think the guards did a great job of helping me out down low by scratching down and giving me a little bit of help.

But I just tried to make him struggle a little bit on offense. And then when we were on offense, I just tried to attack him and find straight line drives down and their coach had to take him out of the game and get four guards in there.

Q. Derrick, sitting down there on the end, I don’t want to think anybody forgot you. Coach has been talking about your 3‑point shooting. You shot the ball well, Nik with one of the big ones in the first half under five minutes and under three minutes in the second half and then Zak coming in also. Just your thoughts in shooting in the stadium here and how well the ball went in for you guys this evening?

DERRICK WALTON, JR.: Yeah, like Coach said, we shoot a lot of 3s, but we kind of find the right spots and the time to shoot the 3.

We did a good job picking our spots, hitting open shots. We work on it a lot in practice. It’s only right to go out and shoot them in the game.

THE MODERATOR: Anything else for the student‑athletes? Okay, fellas, you’re dismissed. Thank you. Michigan locker room will be open about another 15 minutes, I think.

Q. John, I don’t know if you’re one to get hypothetical. You won. You didn’t lose. But what if you had, can you imagine how it would have been categorized or described if you lost that lead on this stage?

COACH BEILEIN: I don’t know why I even have to answer that. Yeah, it would not have been good. It would have been a tough bus ride back, but we didn’t.

We’ve had several games where the ball bounced one way or another at the end of the game. But they created some great breaks for themselves. We had some times, like you said, their run down the stretch right there, a couple of turnovers, and then just inbounding the ball like that is difficult to do.

But just enough to win. But it didn’t happen, so I’m not going to worry about it one minute.

COACH BEILEIN: It’s not just the play at the end. It’s the plays in the middle of the game. Today we had, Caris hit five turnovers and Derrick had three. We just played a game where neither one had any turnovers. And turnovers in the back court are worse because they’re going to lead to a run‑out at the end.

There’s going to be plays in the game here and there. The whole thing is these kids always believe and they never stop. They just never stop believing we’re going to win the game.

And we get just enough stops. And, remember, it’s a real young team. They’re experiencing so much of this really on a first or second time of college. The experience showed in Jordan Morgan, he’s been through a lot of these.

Q. Speaking of Jordan, did you notice him being especially motivated for this game, and could you describe the impact he’s had, not just in this game but in the tournament?

COACH BEILEIN: Here’s a great story about him, is that in the days coming up to this ‑‑ we had played a really good Michigan State team in the championship, and we’d been in foul trouble the whole time. And afterwards I said maybe we should have double teamed Adreian Payne. We didn’t.

So we practiced for two days on double teaming in the post if we needed to do it. I think he took it as an insult, that he thought that we couldn’t guard him.

You just don’t know how the game is going to be called sometimes because he’s had foul trouble in his first three years. He did a wonderful job. But he was not happy with this idea that he wasn’t going to be able to play Stokes one‑on‑one.

Q. Coach, with six players on your Indiana roster, of course you come to Bloomington, you go to Lafayette, you were just here recently for the Big Ten Tournament. With Zak, Glenn and Spike getting most of your playing time out of those six, being underclassmen, do they put a lot of pressure on themselves to come back to their home state to play?

COACH BEILEIN: I don’t think they looked like it today. I mean, for Zak to come into this environment where his parents drove all the way from Fishers over here about a 30‑minute drive, 20‑minute drive to come here, he’s an amazing young man. We really think he’s going to be a special player for us.

What’s really good about Zak is that all those other guys got to play major minutes early. He’s had to wait and ‑‑ guys that can come off the bench and shoot like that are rare. And he’s embraced his role.

Q. Coach, can you talk about the way your guys attacked in the first half with the penetration, how that got the offense in sync?

COACH BEILEIN: That was the whole idea, we got on one‑on‑one early in the first half and then we attacked much more. We felt if we could spread them out we could do some good things. But then they said the second ‑‑ the 13 turnovers, the things that just kept us from being able to exploit the matchups.

Richardson did a great job, really did a good job. And they created a lot of the steals that they had, where they ended up having seven steals, that just doesn’t happen to us.

THE MODERATOR: Take one more for Coach Beilein. Seeing none, we’ll see you tomorrow.