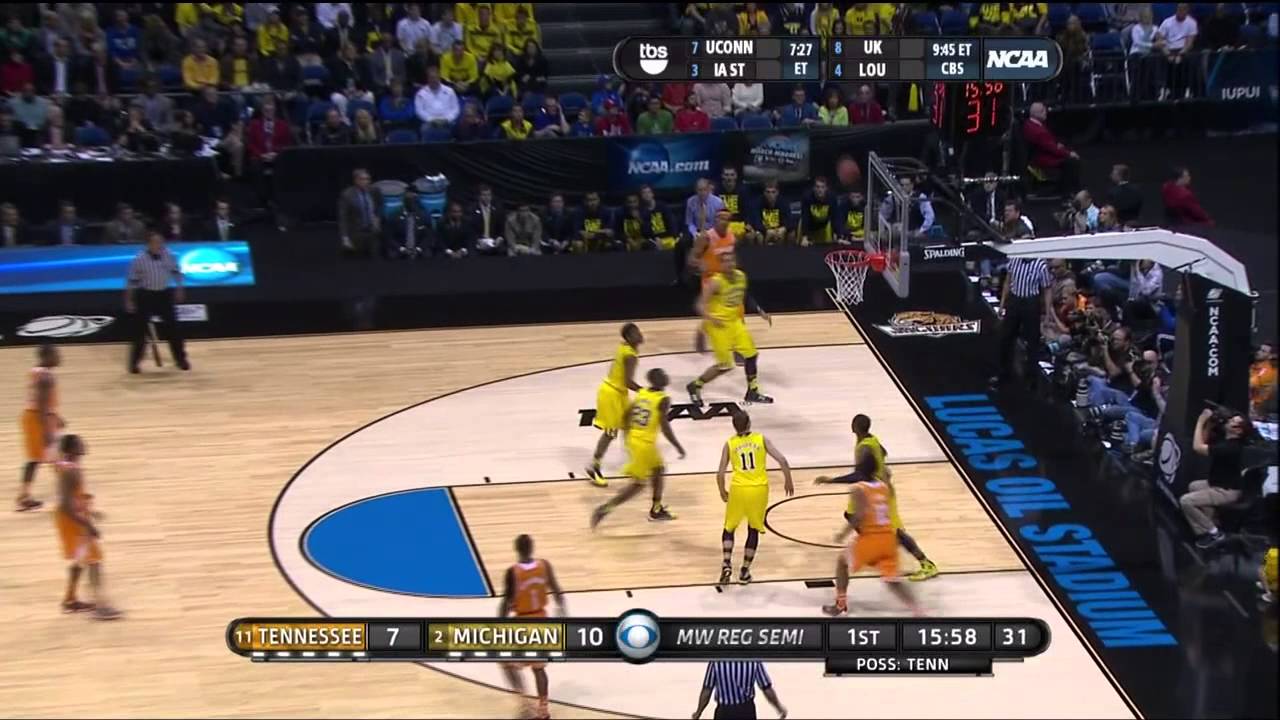 In the days leading up to its 73-71 victory over Tennessee in the Sweet Sixteen, Michigan players heard much of the same talk they heard going into their matchup with Texas one round earlier: the Volunteers are bigger and stronger, Glenn Robinson III and Jordan Morgan will struggle with their bigs. That isn’t exactly how things turned out. Both Morgan and Robinson turned in big games against Tennessee’s vaunted front line, and Robinson got things started early. The first play of this sequence was the opening the play of the game, and Robinson took the ball right to Jerrone Maymon. He easily takes the big man off the dribble and gets the edge on him, finishing with the left (!) hand. A few minutes later, Tennessee decides to get Maymon the ball and let him go to work in the post. But Robinson goes straight up and disrupts Maymon’s drop step, forcing a miss at the rim — great one-on-one defense by Robinson against a much bigger player. Plays like these, and two early fouls on Maymon, forced Tennessee to go with a four-guard lineup, which is what we see on the next play. But even then, Robinson dutifully locates his man when Jarnell Stokes’ shot goes up and boxes him out using great defensive rebounding position. The following two plays are just great examples of Robinson taking his defender to the basket one-on-one, with a first step that seems to be quicker with every game.

“I tried to be strong in the post.  I tried to front it when I could, make them force tough passes into the post,” Robinson said of the matchup after the game. “And I think the guards did a great job of helping me out down low by scratching down and giving me a little bit of help. But I just tried to make him struggle a little bit on offense. And then when we were on offense, I just tried to attack him and find straight line drives down and their coach had to take him out of the game and get four guards in there.”

Zak Irvin has one job when he enters the game: shoot the ball. That’s exactly what he did in Michigan’s win over Tennessee. The freshman played 11 minutes and used that limited time to fire three 3-pointers. He made every one.

“That’s his role. That’s what he does,” Michigan assistant LaVall Jordan said after the game. “We call him ‘Big Shot,’ and we needed every one of them. Two point game, he comes in and knocks three of them in — those were all key baskets.”

Two of those triples are found at the start of the above sequence. These baskets are stretched over  a period of six minutes, but it was in this period Michigan increased its lead to double-digits. Tennessee had actually taken a one-point lead before Irvin’s two threes. Then Nik Stauskas makes a pretty ridiculous play, finding himself trapped in the lane without a pivot foot and electing to throw the ball off the backboard to himself and then hit Derrick Walton for a corner three. Walton couldn’t hit but was fouled and made all three free throws. After a quick pullup midrange jumper by Caris LeVert, LeVert hits Nik Stauskas in the corner for a fast-break triple. Finally, LeVert takes it to the rim himself and gives Michigan an 11-point lead late in the first half.

3) Tennessee goes on 8-0 run midway through second half

There’s no other way to put it: outside of defensive rebounding, Michigan’s defense was putrid on Friday night. The Wolverines simply could not guard Tennessee’s wings on the perimeter and for the most part, the Volunteers got inside whenever they pleased. Jordan Morgan’s focus is always cleaning up defensive rebounds rather than going for blocks, but that was especially true in this game, with Jerrone Maymon and Jarnell Stokes so dangerous on the offensive glass. This gave Tennessee guards, for the most part, open paths to the basket once they got by their initial defenders. Morgan was great on the defensive glass — the redshirt senior grabbed six defensive rebounds, but more importantly, Stokes and Maymon combined for only three offensive boards. On the first play of this sequence, Tennessee ran Michigan through a myriad of screens, both on-ball and off-ball, to get Jordan Richardson open for a midrange jumper. After scoring in double figures once in his last six games, Richardson was on a tear in this NCAA tournament, averaging over 19 points per game. He scored 19 points against Michigan. Armani Moore took Michigan baseline and finished with contact. Darius Thompson gives Spike Albrecht a little push-off and makes it to the rim, with Moore finishing the tip-in. Other than the first basket, every bucket Tennessee scored in this stretch occurred at the rim.

“We felt like going into the game we could drive the ball, attack the rim, make plays,” Tennessee coach Cuonzo Martin said after the game. “We didn’t do a very good job (in the first half). We did it in spurts in the first half. I thought the second half we were very aggressive in getting to the rim and those were the results. So being assertive, taking the scouting report to the floor and it worked for us.”

4) Michigan has turnover issues late in the second half

This is where you may want to avert your eyes if you’re a Michigan fan. The Wolverines could have easily lost this game for one simple reason: turnovers. We covered this phenomenon in-depth after the game. The first play saw Michigan simply run out of time on the shot clock as the offense stalled. It’s the out-of-bounds plays where things really got frustrating. Immediately following the shot clock violation, Josh Richardson gets to the rim and finishes a tough layup inside. After a foul by Tennessee, Spike Albrecht is inbounding the ball and hits Glenn Robinson III in a very precarious position. Tennessee played great defense on these possessions, but Michigan players and Albrecht share equal blame, in turn, for not being able to get open and for putting teammates in impossible situations. Robinson tries to get the ball to Caris LeVert but eventually Michigan gives it back to the Volunteers and McRae drives baseline easily right by Stauskas. Finally, Michigan turns the ball over when Albrecht hits LeVert with a pass that sends him stepping out of bounds, and it was Tennessee ball, down only one point.

“I think the way we did it, first of all, it’s very, very hard to inbound the ball four or five times from a dead spot,” Beilein said of the late turnovers after the game. “I don’t care where you are on the court. You only have so many out of bounds. Only have to do that a couple of times a year‑‑ a couple times a game, not four or five in a row. Once we expanded the court, Glenn made the great catch on a longer one.”

5) Jordan Morgan takes a charge to seal the game

This play was one of those situations where you have to congratulate Jordan Morgan on making a play while also understanding the grief of Tennessee fans who saw their season end on a called charge. Morgan was in the right spot at the right time and knew he was going to take a charge the whole way. It was a smart, gutsy play and it worked out for him and for Michigan. Given Morgan’s main area of expertise has essentially been negated this season with the rule changes, it was nice to see him draw a classic clutch charge. That being said, it’s always disappointing when the referees play such a big role in deciding a game, especially a Sweet Sixteen game where someone’s going home. Morgan was on his way to the floor before Stokes even lowered his shoulder, and he sold it well. It’s clear Morgan is taking these big matchups personally, and whether you like the charge call or not, he was awesome in this game: 15 points to lead Michigan in scoring to go along with seven rebounds, a block and a steal.

“They set a screen for him to come open, so I knew that the play was going to be for him,” Morgan said after the game. “And I just know he likes to play bully ball, he’s in a stance ready. I don’t know. I just was there. It’s just something I do. I take charges. That’s what I do.”