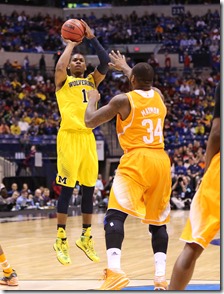 INDIANAPOLIS — Glenn Robinson III flirted with the NBA draft after last season, but opted to return to school. He vowed that there was more to his game that most hadn’t seen. He wanted to move to the three position and display his complete offensive game. (Photo: Dustin Johnston)

Things never quite went as planned. Mitch McGary got hurt and Robinson’s new role in the Michigan offense never materialized.

“At the beginning of the season, things weren’t going right,” Robinson explained on Saturday. “I was going to play the three and coach decided he wanted me back at the four when Mitch got hurt.”

The move was tough on the 6-foot-6 sophomore.

Michigan’s original plan was to play with two big men at the same, allowing McGary and Robinson to slide down a position from their freshman season. McGary sat out during the fall and Michigan was forced to work on a new plan.

“Because [McGary’s] injury happened early enough in late August, early September, we virtually did all of our individuals without him. We had a month of practice in October without him,” John Beilein said. “So we had that in place. When he came back, you know, then we started to work the other plan that we had over the summer. Then he went down again and we went back to plan A (without McGary). So it was a fairly seamless change back to the original plan that we started.”

For Robinson, a player eager to showcase his NBA capabilities, this was a disappointing blow. Not only was his best friend out of the lineup, he wasn’t getting the opportunity he felt he deserved. His uneasiness manifested itself on the stat sheet. He disappeared for long stretches, failing to reach double-figures in five of six games during Big Ten play, and received plenty of criticism from Michigan fans, NBA Draft ‘experts’ and the national media.

But recently Robinson has started to realize the opportunity in front of him and his play has followed. Robinson has reached double figures in 11 of his last 12 games. He’s 59 of 122 from the floor for a 52 effective field goal percentage.

“It was probably not until a fourth of the season [that I accepted it],” Robinson said. “And I just kind of let it go and decided to play my basketball. I had a great run actually for quite a few games there. I was like, ‘there’s nothing I can do about Mitch getting hurt, or playing the three’. Now I’m switching it up playing the four and three when Nik needs time out.

“I’ve done a good job of switching it up and taking my skills as a three-man and using it against slower four men like yesterday’s game.”

“To be able to make another tourney run is great,” Robinson said. “To get to play in front of all those fans for the school one more time and just being around my teammates.”

“Once you leave college you’re never going to be a part of a real team anymore. Guys are playing for contracts, for their families and everything. We’re actually one team that doesn’t care. We don’t care who scores or we don’t care who gets the credit. We are just out there to play basketball for each other.”

This Michigan team will have at least one more chance to play basketball on Sunday when it faces Kentucky for a trip back to the Final Four. For Michigan’s sophomores, leading a return trip to Dallas would be the ultimate validation after they supported Trey Burke and Tim Hardaway Jr. a season ago.