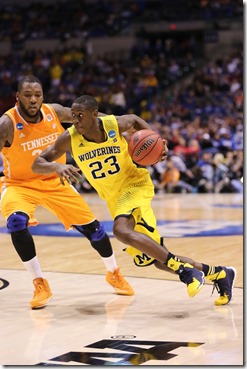 INDIANAPOLIS — Michigan will face off against Kentucky on Sunday at Lucas Oil Stadium for a chance to reach its second straight Final Four. The Wildcats are very strong down low, rebound an absurd amount of their own misses and don’t shoot the ball from outside particularly well.

It should. Michigan’s past two NCAA tournament opponents — Texas and Tennessee — have actually prepared the Wolverines quite well for facing off against Kentucky. Neither Texas nor Tennessee has the combination of size, skill and athleticism that Kentucky has, but they could be seen as extremely valuable warm-up acts for Wildcats. (Photo: Dustin Johnston)

“Just like we were tested against Texas and Tennessee, we are also going to have to come out and box out and be prepared,” Glenn Robinson III said during media sessions on Saturday afternoon. “One thing about them is that they have great wings and guards that can knock down shots as well.”

That last part isn’t necessarily true. They have players who are capable of knocking down 3-pointers — James Young and the Harrison twins (Andrew and Aaron) come to mind — but as a team Kentucky shoots poorly from long range. The Wildcats have only hit 32 percent of their long balls on the season, and only one player — Andrew Harrison — shoots better than 35 percent from the 3-point line.

This attribute further solidifies Kentucky as simply a better version of the two teams Michigan just got through playing. The Wildcats have talent coming out of their ears, but their style remains the same: crash the boards, drive the lane, get to the foul line, play good half court defense.

“When we look at the offensive prowess of both Tennessee and Texas, those are top five offensive rebounding teams in the country,” Michigan assistant coach Bacari Alexander said in the locker room on Saturday. “If memory serves me correctly, Kentucky is number two. Here’s yet another challenge where we have to block out a different type of guy.”

Alexander’s memory, as usual, is a steel trap. Kentucky is indeed the second-best offensive rebounding team in the country, and it’s one of the Wildcats’ main offensive weapons. The “different type of guy” Alexander is referring to is really two guys, both (obviously) freshmen: Dakari Johnson, a 7-footer who will be taking over injured center Willie Cauley-Stein’s minutes, and freshman phenom Julius Randle, who can do a lot more than just rebound.

In games against Texas and Tennessee, Michigan was able to control the glass — for three out of four halves, at least. Texas grabbed a ton of offensive rebounds in the second half of their round of 32 matchup. The Wolverines’ strategy going into this game will be no different.

“One of our strategies when we’re outsized each and every night is to get our bigs … to just block out their man,” Alexander said. “Caris LeVert, Derrick Walton can get those clean rebounds. That does one of two things: one, it helps us control the glass; two, it helps ignite our transition game. When you get primary ballhandlers to rebound the basketball like they’re doing, it makes it difficult for opposing defenses to get organized with great decision-makers with the ball that early in the break.”

Any Michigan player will tell you that the Wolverines are always looking to run, and it’s true. But their ability to get out on the fast break will be especially important against Kentucky. The Wildcats are very good in half-court defense, but are one of the worst in the country at defending against run-outs.

There are generally two ways to get out on the fast break: defensive rebounding and forcing turnovers. Michigan has been good at the former and never that great at the latter. But against a team made up almost exclusively of freshmen, the Wolverines will be going after the ball. This likely means a healthy does of John Beilein’s 1-3-1 zone, but it will also mean playing post defense the way they did against Tennessee and Texas: with lots of scratching down by the guards once a post player gets the ball.

“No one on the floor wants to leave our guy with a big man one on one in the post,” Derrick Walton said during media breakout sessions on Saturday. “At this level it’s really tough to guard a guy one-on-one that goes to the basket. All our guards make a conscious effort to try to help as much as possible by scratching down, just give them a little extra support and force them to throw the ball out the paint.”

What has allowed Michigan’s guards to play this way, against Texas, Tennessee and now Kentucky? It’s simple: lack of outside shooting on the perimeter. Michigan coaches feel comfortable with their guards giving up a few open looks in the service of forcing turnovers down low, as long as the odds are good the opposing team will miss. That has been the case for the past two NCAA tournament games, and it’s likely to be the case on Sunday night in Indianapolis.

“The last few teams we’ve played have a few shooters, but not as many as we have,” Walton said, in the most obvious statement uttered during this season’s tournament. “That gives guys like me, Caris and Nik the leeway to go scratch down and we don’t really have to worry about our guy making an open jumper. The last few teams, without great shooters in the lineup like we have, gave us a chance to scratch down and help our bigs.”

Texas and Tennessee did Michigan a tremendous favor by preparing the Wolverines to face Kentucky. It’s up to Michigan to apply what its learned.