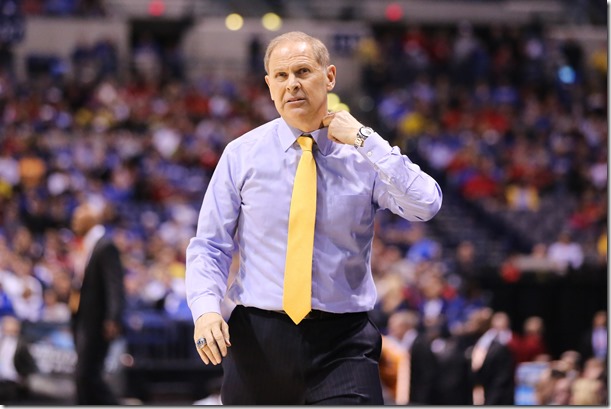 INDIANAPOLIS — The lead was blown. The game had been slipping through Michigan’s fingertips like so many grains of sand for the latter half of the second half, and in the final two minutes the Wolverines threw what little sand they still held into the air, LeBron James-style.

Michigan had once held a 15-point lead, but that deficit had shrunk slowly as the second half had worn on. After a 10-2 Tennessee run midway through the half, Michigan committed some bad turnovers. The Volunteers closed the gap even more with a late 7-2 run and suddenly Michigan’s lead was down to five points.

First, Jordan Morgan bobbled a pass from Derrick Walton as he rolled to basket. It should have been an easy dunk, instead it was Tennessee ball. On Michigan’s next trip down the floor, the offense stalled and Glenn Robinson III wasn’t able to get a shot off as the shot clock expired.

After the game, Michigan coach John Beilein said he had never in his whole coaching career experienced the situation Michigan faced at the end of its eventual 73-71 victory over Tennessee Friday night. Four consecutive out-of-bounds plays, all under the opposing team’s basket, all dead ball situations.

“We went with a scheme three times and then we changed it. What we learned from that is we had timeouts,” Beilein said in a very relieved Michigan locker room after the game. “Spike (Albrecht) threw the ball to people when they were in trouble. … He just wanted to get rid of it. We need to be stronger there. Pressure has never been a problem with us, but that’s a difficult situation.”

A difficult situation, indeed. The situation called for anticipating what sort of press defense Tennessee would throw at Michigan, figuring out where they would trap and with whom, and drawing up a play to counter-balance that. That’s a lot for a coach to process during a timeout. Sometimes, according to his players, Beilein gets a little stressed.

We asked Derrick Walton what Beilein is like in those huddles late in games, with Michigan clinging to a lead.

“He’s kind of frantic,” Walton replied. “But we as players try to do a good job of calming him down and go out there and make the right play.”

Is Beilein freaking out in the huddle?

“A little bit,” Walton conceded with a smile. “But you kind of expect him to do that, giving up a lead like that. Us players try to do a good job of calming him down.”

Michigan’s myriad of turnovers in the closing minutes likely didn’t do much for Beilein’s timeout composure. The Wolverines turned the ball over four times in the final two minutes and scored one point. If there is a recipe for letting a team back into a basketball game, that is it.

All of the Wolverines’ late out-of-bounds plays were dead-ball situations, which meant that Spike Albrecht couldn’t run along the baseline. Albrecht is Michigan’s best inbounder, but he’s also only six feet tall. Given that he usually has a 6-foot-6 wing disrupting his view on these plays, not being able to move around makes his job exponentially more difficult.

“It’s tough at times. Usually it’s not that bad if I can run, but today I couldn’t run, and I was like, you gotta be kidding me,” Albrecht said after the game. “They were doing a little — I don’t even know what it was — it was like a triangle. They were kind of baiting you into throwing a pass. He looked over for a second, but I didn’t want to burn a timeout. I probably made some passes I would like to take back, but that’s alright.”

The stressful nature of the final minutes of Michigan’s Sweet Sixteen win over Tennessee caused some information overload from Beilein during timeouts. But Albrecht said he and the rest of the players were used to it.

“We kind of let him go on his spiel there and then we kind of have to huddle up again after,” Albrecht said, grinning a bit recalling his coach’s demeanor. “Because obviously it’s nerve-racking, especially at the end of the game. He’s got so much to say and but it’s like, we only got a minute in this timeout. That’s what he does.

“That’s the type of coach he is,” Albrecht continued. “Even in practice. His brain’s running a mile a minute out there. But he does a great job, and our assistants to a great job too of adding input and kind of calming him down a little bit.”

You would think, with the practice Michigan has had this season at pulling out close games, that Beilein would be a bit calmer in timeouts down the stretch. The Wolverines are now 9-2 in games decided by five points or fewer. That includes wins over such teams as Michigan State, Ohio State, Nebraska, Florida State and a particularly exciting victory at Purdue.

For whatever reason, in late game situations, Michigan finds a way to execute. Many of the players have attributed this to the fact that most of them were on last season’s team that went to the national championship game — they may be young, but they’ve been on the biggest stage.

“We are a young team, but we have a lot of guys who played a lot of minutes,” Albrecht said. “We’ve had a lot of games like that. I mean, how many games have we had under five points? It’s bizarre, but I think we’ve grown a lot as a team.”

Now, Michigan finds itself on a big stage once again, with many of the players who played bit roles last year suddenly learning how to carry the team. Jordan Morgan, who last year took the biggest charge of his career against Syracuse in the Final Four, did his best to match it with a late drawn charge on Tennessee’s final offensive possession. That play effectively sealed the game and sent Michigan into the Elite Eight for the second straight season.

For now, Beilein will just have to go with the flow — stressful timeouts and all. Because even though Michigan isn’t entirely sure what it’s doing to win all these close games, it’s winning them.

“Somehow, I don’t know how, we keep pulling them out,” Albrecht said.

“And that’s all that matters.”