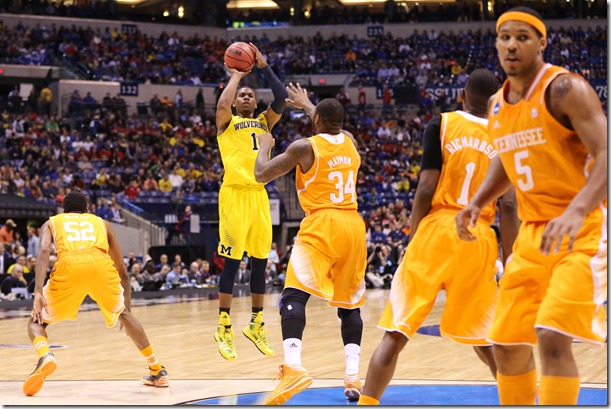 Michigan’s Sweet 16 battle with Tennessee carried out according to plan for the first 30 minutes. The threes were falling, Jordan Morgan controlled the paint and the Wolverines led by double-digits for most of the second half. Nik Stauskas buried a three-pointer with 3:40 to play to put the Wolverines up by 10 and the game looked all but over.

Then Michigan started to unravel down the stretch in a fashion that was eerily reminiscent of its Sweet 16 game last year – in the opposite direction. In its next six possessions, Michigan missed two shots, made one and turned the ball over four times. Tennessee scored on five of its six possessions and cut Michigan’s lead to just one point with 10 seconds to play.

Cuonzo Martin drew up a post isolation play for his best player, Jarnell Stokes, who dropped his shoulder right into Michigan’s fifth-year senior leader Jordan Morgan. Morgan was in the right spot and got the call – the second biggest drawn charge of his career.

The Wolverines finally managed to inbound the ball and get to the free throw line, where Stauskas split a pair, and Tennessee’s desperation heave sailed over the basket. Michigan escaped and will play Kentucky (Sunday 5:05 p.m.) for a trip back to the Final Four.

Michigan’s offense was unstoppable in the first half – managing 1.45 points per trip in the opening 20 minutes – but stalled badly down the stretch, mostly due to the late game turnovers. The Wolverines rarely missed — 55% on twos, 55% on threes – but were uncharacteristically lax with the basketball. Michigan gave the ball away on nearly 22% of its possessions and the turnovers came from every direction: poor inbounding, poor decision making in transition or dribbling into traffic. Despite the turnover woes, Michigan’s 1.21 points per trip were the most than Tennessee allowed all season.

Michigan’s defense deserves a lot of credit for doing a great job on the defensive glass. Tennessee didn’t score a second chance point in the first half, managed just eight for the game and only rebounded 35.5% of its misses. Morgan, Horford, Walton and Robinson were all active on the defensive glass and cleaned up consistently.

On the other hand, Michigan’s perimeter defense was horrendous. Tennessee settled for jumpers in the first half, but realized it could attack the rim in the second. The Vols were 3-of-8 on triples in the first and just 0-of-3 in the second. They shot 59% on twos for the game and it wasn’t so much the big men inside that hurt Michigan, it was Richardson 9-of-14 and McRae (9-of-18) that got to the rim whenever they wanted.

Michigan survived with a win despite tripping over itself down the stretch. The Wolverines defense was beaten with relative ease, but this is the ninth game that Michigan has won while giving up over 1.10 points per possession. Michigan’s going to go out gunning, every game is going to be a shootout for this group but there just aren’t many teams in the country that can keep pace when Michigan is clicking.