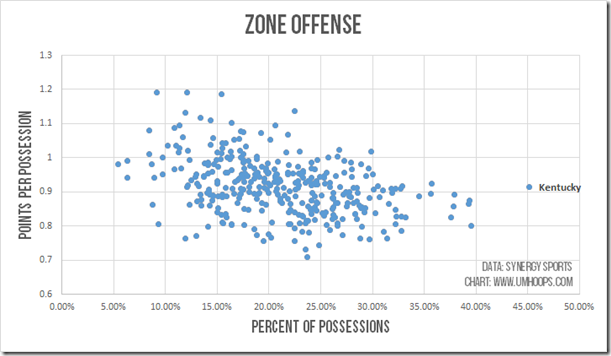 Michigan will face the Preseason No. 1 team in the country, the Kentucky Wildcats, for a trip to the Final Four this evening.

The Wildcats went through their fair share of struggles this season. They lost to Arkansas twice, lost to South Carolina and nearly fell out of the top 25 in February. But despite the ups and downs, no one has ever questioned Kentucky’s talent. Now it’s starting to gel.

“This team has size, talent, skill,” Calipari said. “We just had to come together as a team.”

That’s exactly what Kentucky has done and exactly what college basketball is all about. Peaking at the right time is more important than a February game against Indiana or Arkansas. The Wildcats are playing their best basketball when it matters most and given their talent, that’s a scary sight for any opposition. Kentucky has knocked out two of last year’s Final Four teams, undefeated Wichita State and defending champs Louisville, and now they have a third opportunity against Michigan.

While the Wildcats are great on the offensive glass, they aren’t great shooters. Kentucky shoots 50.1% on twos (102nd) and 32.7% on threes (239th) for a 49.8 effective field goal percentage (158th). Kentucky makes 56% of its shots in the paint, but shoots just 28% on mid-range jump shots. The Wildcats attempt 53 free throws per 100 field goal attempts, 7th best nationally, while Michigan only allows 27 free throw attempts per 100 field goal attempts, 3rd nationally. Both teams are used to controlling the free throw gap, in opposite directions, which will make that factor particularly important. Kentucky doesn’t do a great job of valuing the basketball, giving it away on 18.3% of its offensive possession, and is just 8-7 when it turns the ball over on 19% or more of its offensive possessions.

Defensively, Kentucky is great in the half court and awful in transition. The Wildcats surrender .799 points per possession in the half court, 86th percentile per Synergy, compared to 1.159 PPP in transition, 23rd percentile per Synergy. That’s the largest gap among any teams in the Sweet Sixteen. Michigan’s ability to rebound-and-run and attack the Wildcats in unsettled situations will be critical because transition threes should be available. Kentucky is the 14th best shot blocking team in the country, but was ranked seventh in the SEC in 2-point defense.

Julius Randle is projected as a top-five pick in the NBA Draft and leads Kentucky in scoring and rebounding, averaging 15.1 points and 10.6 rebounds per game. He doesn’t grade out as the best post player in Synergy (48th percentile) – mostly because his distribution from the post is a work-in-progress – but he’s quick, physical and talented.

Randle is dominant when he has two feet in the paint, but the key to defending him is forcing him to shoot over the top. His jumper is unreliable and it should be considered a win whenever he’s shooting jumpers instead of scoring at the rim.

James Young leads the Wildcats in field goal attempts and is a volume shooter from three-point range, but his floater in the lane is one of the more underrated elements of his game.

Andrew Harrison is the only Wildcat to take more than 30 shots off of pick-and-rolls this year. The pick and roll isn’t a big factor of Kentucky’s offense and Wildcats have only scored 36 points on rolls to the basket this season, but Harrison is Kentucky’s best at making something happen off the bounce. He’s also the best assist man, but he gives the ball away on nearly a quarter of his offensive possessions.

Andrew struggles inside the arc – shooting just 39% on twos – but he’s a decent shooter from the left wing and the top of the key.

Andrew’s twin brother, Aaron Harrison , is the more notable scorer. He’s a much better finisher at the rim, but doesn’t have much of a mid-range game.  He’s taken twice as many threes, but his 2-point shooting percentage is nearly 10% higher than Andrew. Aaron is more of a spot-up threat on the wing.

Willie Cauley-Stein injured his ankle and didn’t return to the floor in Kentucky’s win over Louisville. Calipari updated his status on Saturday.

“He’s still in a boot,” Calipari said. ” He’s doubtful.  He’s acting like he thinks he can do something, and I would be stunned if he played in this game.”

Losing Cauley-Stein would be a critical blow for the Wildcats. Cauley-Stein is the 13th best shot blocker in the country and his absence would limit Kentucky’s frontcourt options. The 7-footer plays 24 minutes per game and without him, the Wildcats will rely on three bigs for two spots instead of four.

Alex Poythress, 6-foot-8 239 pounds, and Dakari Johnson, 7-foot 265 pounds, will play critical roles. Johnson is Kentucky’s usual starter at the five while Poythress will spell Randle and Johnson at both spots. The duo are different players, but together bring a lot of the same elements. Poythress is long, athletic and blocks shots, while Johnson is a massive rebounding force on the block. Johnson has only played more than 25 minutes once this season — on Friday vs. Louisville.

Kentucky’s success relies on its defense. The Wildcats are just 3-8 when they allow 1.10 points per possession or more and they are 24-2 when they hold opponents below that mark. Michigan has been held below 1.10 points per trip just ten times this season and are 3-7 in those games. The Wolverines are 25-1 when they top that figure.

If Michigan scores more than 1.10 points per possession, it should win this game.

Michigan’s offense has flirted with perfection for stretches of this NCAA tournament, it’s also disappeared at times. The Wolverines will need to play a complete and dominant 40 minutes of offensive basketball to have a chance. Kentucky is the youngest team in college basketball and should have its hands full trying to prepare for Michigan on a short turnaround.

Guarding the Harrison twins and James Young off the bounce is going to be a chore for Michigan. The Wolverines were hapless defending Tennessee guards Josh Richardson and Jordan McRae, and things won’t get any easier against Kentucky’s versatile, long and athletic backcourt.

There’s a reason that Kentucky has faced zone defense more than any team in the country – it’s really hard to stop them in one-on-one scenarios.

Michigan’s zone defense isn’t great, but there aren’t a lot of better options. 1-3-1 zone, 2-3 zone, I suspect that Michigan will experiment with just about everything.

Making Kentucky defend in transition will be critical because that means that Michigan is controlling the defensive glass, but also finding the opportunity to score in unsettled situations. Jordan Morgan has played out of his mind in the NCAA tournament and if Michigan is going to return to the Final Four, the Wolverines need one more impressive performance from their fifth-year senior.

Ken Pomeroy’s odds project Sunday’s Elite Eight tilt as a 50-50 game and give Michigan a 1 point edge, 71-70. Vegas likes the Wildcats by two. This game has the makings of a shoot out, but if either team can’t keep pace it could get ugly quickly.