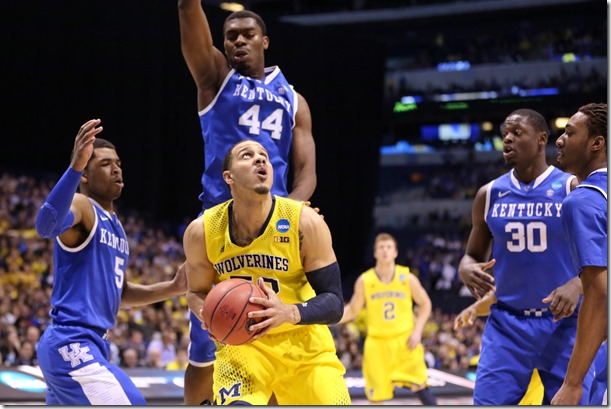 This was always how Michigan’s season was going to end.

The Wolverines were going to go out in a shootout. They would go out playing beautiful offense, but eventually their fatal flaw, poor defense, was bound to catch up to them.

Michigan couldn’t handle Kentucky’s size, length and surprising shooting ability on Sunday night, but that hadn’t mattered all season. This was a Michigan team that had mastered the escape. The list of 50-50 plays that went Michigan’s way this year is almost too long to count. The Wolverines won their last nine games decided by five points or less and had flourished in pressure situations all season. But in a game that featured three lead changes and seven ties, it was Kentucky that made the big shot.

Aaron Harrison buried a 24-foot three with 4 seconds to play that was eerily similar of the shot that Trey Burke hit in Dallas a year ago.

This game had everything that we love to see in March basketball. Both teams made momentum seizing runs, hit big shots and played a clean game. The Wolverines battled back and forth with the Wildcats for 40 minutes of nearly flawless NCAA tournament basketball.

Nik Stauskas, Glenn Robinson III, Caris LeVert and Jordan Morgan all turned in one more great performance together, similar to what they’ve done throughout the NCAA tournament, but this was Kentucky’s night.

This was Michigan’s second worst defensive performance of the season and the Wolverines were hopeless on the defensive glass against Kentucky’s front line. Seldom used reserve center Marcus Lee came into the game and gave Michigan fits with his length (he had seven offensive rebounds). It wasn’t just Lee as five different Kentucky players grabbed at least one offensive board. The Wildcats rebounded 63% of their missed shots and scored 17 second chance points. It was Kentucky’s three-point shooting that made the biggest difference. The Wildcats were 7-of-11 from long range and Michigan’s defense just wasn’t strong enough to withstand the hot shooting.

Michigan shredded one more defense before hanging up its jerseys for the season. The Wolverines scored more points per possession against Kentucky than any other team managed this season. Michigan can say the same thing about ten teams that it played this season, including its final three NCAA tournament games. The Wolverines’ NCAA tournament performance was strong enough to push them into the top spot in Ken Pomeroy’s adjusted offensive efficiency for the second year in a row. Michigan will have to revamp and reload next year, but John Beilein’s offensive brilliance has been kicked into overdrive with the talent he has at his disposal the last two years.

The Wolverines had an average shooting night by their standards – 51% on twos, 39% on threes for a 54% eFG% – but won the free throw and turnover battle to equalize the game. Michigan actually outscored Kentucky 23-17 in second chance points and that was a big reason that the Wolverines were still able to keep pace.

Michigan’s season was a success. The Wolverines went from 6-4 to outright Big Ten Champions – by three games – without Mitch McGary. A return trip to the Final Four would have been the ultimate validation, but there’s no denying what this group accomplished.