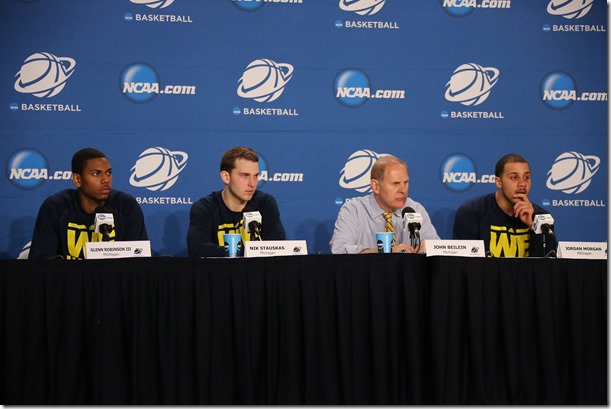 John Beilein, Jordan Morgan, Nik Stauskas and Glenn Robinson III were on the podium after Michigan’s loss to Kentucky on Sunday evening. Read the presser transcript below. (Photo: Dustin Johnston)

COACH BEILEIN: It was a great college basketball game. I think well‑officiated. Both teams really played well. I think even the people that were sitting in the highest seats got their money’s worth today. So really proud of our team.

First of all, congratulate Kentucky. Really great game. They hit big shots when they needed to and so did we.

But it was a terrific basketball game and one that just makes college basketball continue to grow stronger and stronger in today’s sports world.

THE MODERATOR: Okay. We’ll begin with questions, please. Raise your hand, identify your name and affiliation and then we’ll get a microphone to you. Right here.

Q. John, how well do you think LeVert defended on that last shot?

THE MODERATOR: Question for Coach Beilein.

COACH BEILEIN: As we said, we were going to make sure they did not get downhill. Tie game. We had the one foul to give that we wanted to use somewhere under ten. We used it right at ten. They’re so good at driving it.

And they’ve been ‑‑ they’ve been shooting at 33 percent all year. You’re not going to go out and make them drive the ball to the basket. You’re going to make them score over you. I thought he got his hand up. They did a good job on it. But he made a shot from deep.

Q. John, Marcus Lee, No. 00, did you have any kind of scouting report on him because he played so little?

COACH BEILEIN: No, we had very little on him. But he does one thing really, really well, and that’s he plays way above the rim. You can see the size disadvantage was obvious out there.

But we still felt we could find a way to win with a few other breaks.

Q. Jordan, just talk about their length and what a challenge that posed for you guys today?

JORDAN MORGAN: I just think that they ‑‑ it showed most, you know, for them on the offensive glass, just going up ‑‑ like Coach B said, above the rim, getting their hands. Whether they were tipping it in or tipping it back, they were really doing a good job just keeping it alive on offense.

Q. Nik, there was a good few times in the game, the very beginning, at one point in the second half, it seemed like you had the threat that you could pull away for a few minutes. Did you ever feel that way, that you would get some distance on them and that you could still be playing next week?

NIK STAUSKAS: I felt pretty confident all game that we could pull away. But the way they’re getting on the offensive glass, it was just tough for us to pull away because they had so many second‑chance points.

I think we did a good job fighting all game and Kentucky, they’re a great team and they deserve to go to the Final Four.

Q. Question for Nik and for Glenn. I know it’s not the right time to ask this question but, I have to ask it anyway. If you guys plan on coming back to Michigan next year to play or declare for the draft?

GLENN ROBINSON, III: Right now is just not the time. We’re going to discuss that with our families and review upon that.

But our season is over right now, so that’s all we’re really thinking about and reflecting on. And Jordan Morgan, our senior, his career just ended for him, so we’re here for him and our teammates.

NIK STAUSKAS: We’re all pretty sad about this loss right now. We’ll address that later on with our families. But right now just tough going through this.

Q. Jordan, since this is your last game, how hard was it to sit on the bench for such a long period of time there in the second half?

JORDAN MORGAN: It’s tough. You want to be out there, but I think Jon started to play a little bit better the second half. He really started to step it up, and just being, having fouls like that, that was a smart thing to do to just kind of conserve those foul, any foul trouble so that I could finish out the game.

Q. Nik, I imagine you’ve probably been on the other side of that, where you’ve broken somebody’s heart with a last‑second shot. Talk about what it’s like on both sides. Obviously it was right down to the wire, last shot, you see it in the air.

NIK STAUSKAS: They made a great shot coming down. I thought we did a pretty good job contesting it.

Like you said, it’s part of basketball. It’s going to happen to you where you’re going to make the shot sometimes and it’s going to go against you sometimes where the other team makes a shot.

So you gotta tip your hat to Kentucky, they played a great game and that was a big play down the stretch.

Q. Coach Beilein, down seven you had the crowd against you, looked like the momentum was against you. Talk about the resolve in making that a game again.

COACH BEILEIN: Yeah, we’ve had several times, I can’t say at the end of a game, that we have really ‑‑ we have kids that are very consistent in their demeanor. And they don’t go up and down.

So a seven‑point lead in today’s basketball is nothing. And so seven points being down, we just need to make a couple of shots and get a couple of stops. And once again, Glenn made a big, big play. We hit the backboard, got some good plays. We hit just enough shots, really, to win it.

We had just probably as open as we shot the last three plays would have given us the lead if we scored with a tap‑in. But it is a ‑‑ I don’t think our kids ever said, Oh, we’re down seven, we’re done.

Q. Coach Beilein, what do you think of the way that LeVert played, considering he hasn’t been in a game of this magnitude like the rest of the guys being in the Elite Eight, Final Four last year?

COACH BEILEIN: He has been in these games. He hit big shots against Syracuse last year in the Final Four. He has that experience.

And besides all that, he’s one of the, like these other guys, one of the best coaches [sic] I’ve ever coached. So really looking forward to his future, watching him in his future.

THE MODERATOR: Please state your name and affiliation.

Q. Coach, I know you talked about that last shot before. But 24 feet, he’s fading away. If you’re going to get beat by a shot like that, like come on, right?

COACH BEILEIN: The way that this game got to this point, even though James Young hit the 2 in the first half, was it was all about dribble penetration, playing off the penetration, getting the rebound above the rim, and we weren’t going to let them beat in the stairs.

We made sure we had a shot up, but it was a big position defense, make them score over you. And he did.

Give them credit. Tip your hat. It was a long ways away. The one he right after we hit the 3, that Glenn ‑‑ somebody hit the 3 and he answered back in the right corner. He had big‑time shots for them.

Q. Coach Beilein, what did you think of Jon Horford’s play stepping in for Jordan, especially since he’s going to be coming back a senior next year?

The problem we had this year was Jordan was playing so well, he was such a leader and such an asset to the team. So we’re looking forward to Jon and what he can bring to this team. He brings a very mature influence on the team.

THE MODERATOR: One more question. Anyone? Right here in front.

Q. Jordan, just talk about what you’re going to remember most about this team. A lot of guys have said this is the best team they’ve played on in terms of togetherness.

JORDAN MORGAN: Yeah, I mean, just this year has been the most fun time I’ve had probably playing basketball ever. Really got close with a lot of guys, had the opportunity to grow myself as a leader and be a mentor to some of these young guys and I just appreciate the opportunity.

THE MODERATOR: Congratulations on a great season.