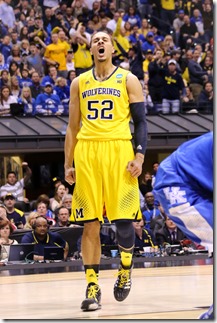 INDIANAPOLIS — It was a good death.

It was a glorious death, really. Michigan’s 75-72 loss to Kentucky on Sunday was epic and thrilling and extraordinarily well-played by both teams. Michigan and Kentucky traded haymakers all game long, and Kentucky had to play perhaps its best game of the season in order to come out on top. If the Wolverines had to go down, they were going down swinging.

But no matter how great the game was, it was still the end. And ends are difficult. This was not only the end to an amazing season for Michigan basketball; it was also the end of one of the all-time best playing careers in program history — that of Michigan’s redshirt senior captain, Jordan Morgan. (Photo: Dustin Johnston)

Outside of Michigan winning the national title — which was three games away from happening, keep in mind — the end of Morgan’s career was always going to be heart-wrenching. This is because in order to maintain the level at which he’d been playing, he needed to keep the end of his career at Michigan in the realm of abstraction. It’s the NCAA tournament; for all seniors, each game could be their last. Dwelling too much on that would be a costly distraction.

So when the end finally came on Sunday night in Indianapolis — even though Morgan knew it was coming, had been talking about it for weeks — its reality still brought with it a jarring element of surprise.

“I didn’t expect it to be my last game,” Morgan said, red-eyed, shaking his head in the locker room after the game. “It’s over, you know? I don’t know what else to say.”

There is nothing left to say about Morgan, just as he has nothing left to prove. He was undeniably the beating heart of this Michigan team. He finally figured it all out just as his career was drawing to a close, and while there is something slightly tragic about that, it felt more like triumph as the season wore on. He scored almost 13 points per game and pulled down nearly eight rebounds per game in the NCAA tournament, even leading Michigan in scoring against Tennessee. You can’t argue with those numbers.

He had one more fight in him, against one of the nation’s best front courts led by Kentucky freshman Julius Randle. Morgan battled foul trouble, only playing 22 minutes, but still managed to score 11 points and grab four offensive rebounds.

“I mean, it hurts, having a guy like J-Mo put his blood, sweat and tears into this game for this team,” Derrick Walton said after the game. “Coming up short, knowing that you could have made an extra play for him, it hurts.”

That was the sense afterward — all it would have taken was one more play. One more stop, one more made basket, and maybe this wouldn’t have been the end. But a Michigan team that found just enough to win in these tight games all year long finally came up just short.

Credit absolutely must be given to Kentucky. The Wildcats shot 33 percent from the 3-point line this season and went 7-of-11 from deep on Sunday. They rebounded an incredible 63 percent of their misses. Those two outstanding performances combined for an astounding offensive game. Michigan’s offense matched Kentucky’s blow-for-blow, and the final five minutes certainly had the feel of a heavyweight prize fight. The two teams were trading haymakers, one after another, and Michigan, somehow, was out-punched.

“It was like a heavyweight bout,” Spike Albrecht said. “If we were going to lose–” and then he catches himself, because Michigan is not in the business of accepting losses, not anymore. “Obviously, it’s unfortunate. But I was happy with the way we played today.”

There was no secret to Kentucky’s game plan on Sunday evening. The Wildcats have arguably the most talented roster in the country and John Calipari implored his team to attack the rim all game. After the game, Calipari even tried to take credit for “setting up” the 25-foot 3-pointer Aaron Harrison hit over the outstretched arm of Caris LeVert.

“I can just tell you the last play we set up is:  Aaron, just step back and shoot a deep 3,” Calipari said. “They won’t guard you.”

Of course, the coach’s assumption that Michigan wouldn’t guard Harrison proved to be a fallacy — LeVert played great defense, and the talented freshman just made a play.

“He just hit a tough shot,” LeVert said. “I’ll have to see it again, but I thought I had contested it pretty well.”

Michigan’s loss on Sunday night at Lucas Oil Stadium was crushing, but the season it so cruelly capped was an unmitigated success. The Wolverines were outright Big Ten champions, they made it to within a game of the Final Four and played a starring role in an NCAA tournament classic, even if it was the role of the loser.

So it was a good death, but obviously it isn’t a death at all. It’s the end of a basketball season. There will be more. Jordan Morgan’s Michigan career is over, but he will be graduating with a master’s degree in manufacturing engineering in June and as Beilein said after the game, “He’s going to be so successful in whatever he does.” And Michigan finds itself in the surreal position of being somewhat disappointed with reaching the Elite Eight in the NCAA tournament. This basketball season is dead, but the Michigan basketball program is perhaps the healthiest it’s ever been.

Michigan’s season ended with a 3-point loss to a great team in a game that was a credit to the sport of basketball. These factors don’t make losing easy, but they might make it tolerable. The objective success of Michigan’s season compared with the heartbreaking defeat leads to a confusion of passions, something like a grateful sadness. It is undoubtedly this strange mixture that Jon Horford saw in his friend as he walked off the court in a Michigan uniform for the final time. Here, Horford is speaking of Morgan, but he might as well be eulogizing what was a season to remember for the Michigan Wolverines.

“Jordan, he’s out of time. He’s out of games, this is it for him,” Horford said. “But it’s also something to celebrate. The tears aren’t all of sadness. There are tears of happiness in there.”