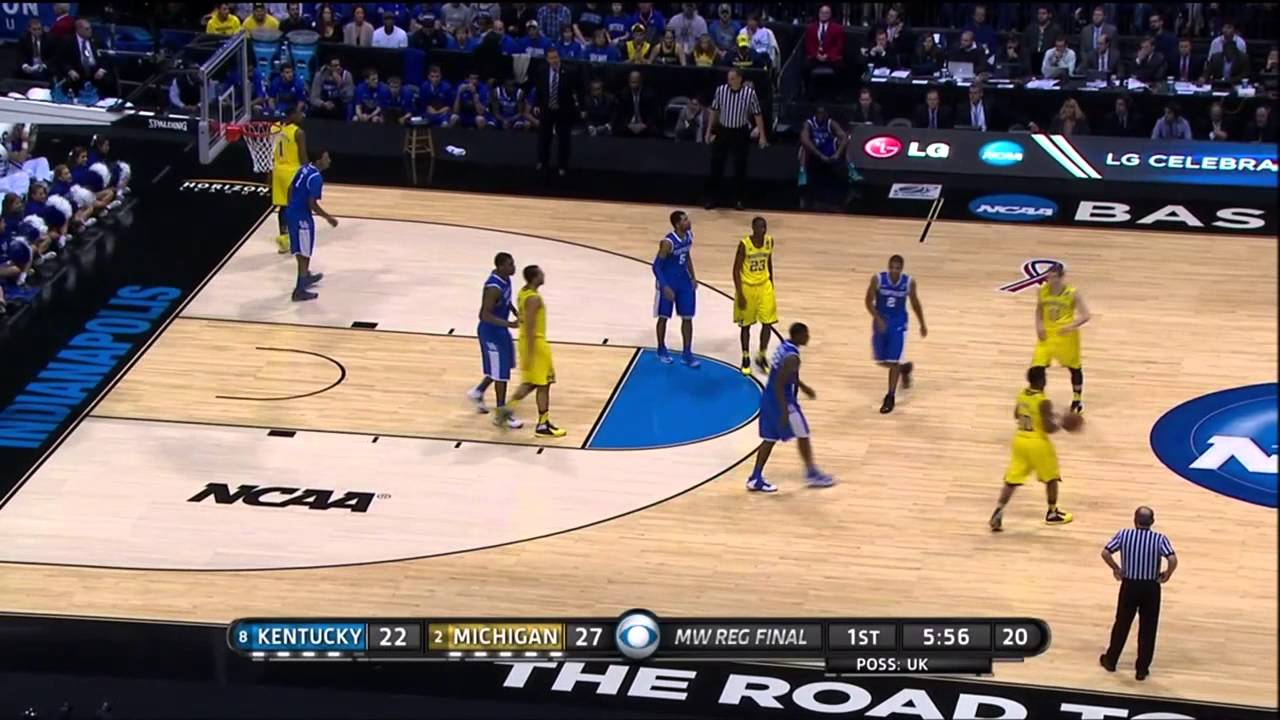 1) Nik Stauskas delivers for Michigan in the first half

Michigan’s 75-72 loss to Kentucky in the Elite Eight didn’t have a happy ending, but it was still a great game and there were plenty of highlights. In the first half, Michigan’s offense revolved around Nik Stauskas — the sophomore scored 18 points in the opening frame alone, and he only needed seven shots to do it. Stauskas was off-the-charts efficient thanks to two 3-pointers and six free throws. The first two plays of this sequence show Stauskas hitting from deep. The first play has Aaron Harrison and Alex Poythress mixed up on a ball screen. Harrison switches onto Jordan Morgan and Poythress is lackadaisical in his switching, giving Stauskas just enough breathing room to fire and hit. The second three is from way beyond NBA range, as Caris LeVert shows drive and draws the slightest attention from Marcus Lee before dumping the ball to Stauskas for the long 3-pointer. After his shooter’s touch and a bit of luck net him a mid-range pull-up, Stauskas drives the lane and hits the and-1 layup after Andrew Harrison attempts to draw the charge. Finally, Stauskas gets his hands on the ball after it’s fumbled by Dakari Johnson and pushes it the other way. It looked like he had Derrick Walton on the fast break, but Stauskas pulls it out for a slick hesitation move on Aaron Harrison for the lay-in. In the first half, it was all Stauskas for Michigan, while it was all inside buckets for Kentucky.

Before this stretch of unanswered points by Kentucky, Michigan was on a roll offensively. The Wolverines were coming off a 6-0 run that gave them a four-point lead over the Wildcats, and all three of their baskets had been assisted dunks — by Nik Stauskas, Glenn Robinson III and Jon Horford, respectively. But after Horford’s dunk, Kentucky scored 11 points while Michigan went scoreless for a full five and a half minutes, something completely out of character for the Wolverines. Five of the Wildcats’ points in this stretch came against the 1-3-1, which didn’t acquit itself well in this game. On the first play, Jon Horford is shading toward the left side of the defense around the free throw line, which gives Andrew Harrison just enough room t fire a great pass through the defense to Dakari Johnson for the easy dunk. Later, Julius Randle initiated a string of four straight scoring possessions for Kentucky with a nice runner through the lane over Zak Irvin. Michigan goes back to the 1-3-1 on the next possession. Andrew Harrison gets into the middle off  the dribble and Michigan leaves Aaron Harrison wide open for three. Harrison hit his first three of the night on that play, and he would hit three more; Harrison scored every one of his 12 points in the second half. Randle cleans up a missed James Young layup and scores off the putback on the next possession. Harrison makes a great drive on Stauskas for the tough lay-in to stretch Kentucky’s lead to seven. At this point, Mihcigan didn’t look as though it could stop Kentucky long enough to get back in the game. But the Wolverines had one final push left.

3) Michigan comes back with a couple of 3-point plays

And just like that, it’s a game again. After going down by seven points, All Michigan needed was one stop to get right back in it thanks to its quick-strike offense that has found a way to win all season. On the first play, Caris LeVert takes his man off the dribble and forces James Young to cheat off Glenn Robinson III in the corner. LeVert hits Robinson, who buries the three for Michigan’s first points since the 11:31 mark. On the other end, Michigan finally gets a rebound when Nik Stauskas swoops in and corrals a Julius Randle miss. Stauskas pushes the ball upcourt and gets to the rim but misses the layup. Luckily, Jordan Morgan is there to collect the miss and hit the putback, getting fouled in the process. The redshirt senior knocks down the free throw and suddenly Michigan is down only one point heading into the final 4:30 of the game.

“Yeah, we’ve had several times, I can’t say at the end of a game, that we have really‑‑ we have kids that are very consistent in their demeanor.  And they don’t go up and down,” John Beilein said at the podium after the game. “So a seven‑point lead in today’s basketball is nothing. And so seven points being down, we just need to make a couple of shots and get a couple of stops. And once again, Glenn made a big, big play. We hit the backboard, got some good plays. We hit just enough shots, really, to win it. We had just probably as open as we shot the last three plays would have given us the lead if we scored with a tap‑in. But it is a‑‑ I don’t think our kids ever said, Oh, we’re down seven, we’re done.”

Nik Stauskas made some huge plays in this game, but he wasn’t really feeling it in the second half as he was in the first. Glenn Robinson III, on the other hand, had turned it around after a lackluster first half and had just hit a huge three from the corner. So Stauskas the gunner made the smart play on this possession for Michigan in passing up the three and making the extra pass to Robinson. Michigan took advantage of some defensive confusion for Kentucky, with both Harrison twins marking Caris LeVert at the top of the key. LeVert hit Stauskas and Stauskas hit Robinson. And Robinson hit the big 3-pointer to give Michigan a fighting chance heading into the final minute of play.

The next play in this sequence was quite a thrill ride. All told, Michigan took four shots on this possession — Stauskas took two of them, Derrick Walton took one, and Jordan Morgan finally got the tip-in to score. But the player who made the biggest difference on this particular play was probably Caris LeVert. Watch after Stauskas misses his baseline three as LeVert leaps into the fray and comes down with the ball. LeVert was parallel to the ground as he came down with it, passing to Stauskas in mid-air at the last season. It was a fantastic play, and finally Morgan was able to tap Walton’s miss in to tie the game at 72.

What is left to say about this shot? Aaron Harrison stepped up huge when his team needed him and made big plays down the stretch throughout the second half of the game. He was 4-for-5 from beyond the arc and no shot was more important than this final make over Caris LeVert. LeVert  played great defense, and if he hadn’t cut his fingernails for a couple days he might have gotten a piece of the ball. If Michigan was going to lose, it was going to be because they couldn’t get a crucial stop — they were going to have to be outscored. Kentucky, thanks to incredible offensive rebounding and great shooting from deep, was able to do just that. Hats off to the Wildcats, they played a great game.