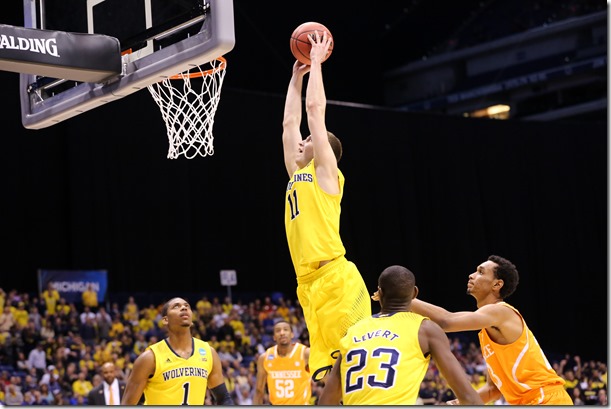 Nik Stauskas, Glenn Robinson III and Mitch McGary all made it clear that they weren’t ready to discuss their draft stock after Michigan lost to Kentucky on Sunday. But their decisions are coming soon and are the most important news bits expected over the next month. Here’s the latest on all three players’ decisions, draft stock, and when they need to make a decision. (Photo: Dustin Johnston)

The concept of ‘testing the waters’ has essentially been eliminated from the draft process. Prospects only have until April 15th, 2014 to remove their names from the NBA Draft and maintain NCAA eligibility – the NBA allowed June 16th date has no importance to the NCAA.

Nik Stauskas wasn’t even on the NBA Draft radar last year, now he looks like a lock to go in the top 20. Chad Ford’s latest update is very positive:

Stauskas continues to show why NBA teams are so intrigued by him. He is an incredible shooter with a quick release and great range. He shot 12-for-30 from 3-point range in the tournament, not his finest hour. But no one questions his ability to shoot the basketball. He also shows significant handles for a player his size and can be a pretty explosive finisher around the basket. He should go late-lottery to mid-first round and is expected to declare for the draft.

Stauskas is listed as a prospect with ‘one foot out the door’ by Chad Ford, and it would be a surprise if he returned to school.

Robinson is a more interesting case. He largely fell off of the NBA Draft hype-machine after a lackluster start to the season, but he played his best basketball in the last month. He got hot from three, he started playing more aggressively and he was a major reason that Michigan won 10 of its last 12 games.

His draft prospects don’t seem to have rebounded completely, but some feel they should have.

Robinson III started the season as a potential lottery pick but has watched his stock fade while struggling to prove to scouts that he can hit enough perimeter shots to play the 3 in the NBA. He actually was 6-for-10 from 3-point range in the tournament and played some of the best basketball of his career, which has moved him back into the discussion as a late-first-round pick. Another year at Michigan, however, could move his stock up higher. Scouts are intrigued by him; they just want to see more skill development.

Will he stay or will he go? Robinson seems to be a true 50-50 case at this point. He seems to be right on the edge of the first round, but most mock drafts have him projected early in the second.

Mitch McGary could have struck when the iron was hot last spring, but he decided to return to school to lead Michigan. He made his decision for all of the right reasons, but his sophomore year couldn’t have gone much worse as he played in only eight games and missed most of the season with a lower back injury.

McGary hasn’t played since December, but his rehab has gone well and he’s started running, etc. If McGary is healthy, would he opt to prove his abilities in draft workouts instead returning for another season? Many experts feel that would be the wrong decision.

EI: Without knowing how far along he is in his recovery, its tough to say what he could show for teams before the draft. McGary’s rise last year was based on a good final 6-8 weeks of the season, and he is still very much a player who has a lot to prove to teams. Regardless of his age, coming back for one more year will only help him as a player and give him a chance to secure a place higher in the draft.

MLive’s Brendan Quinn asked a draft scout, who reported that McGary would be ‘picked apart’:

For one NBA talent evaluator, McGary could be selected in the 2014 NBA draft “anywhere from late in the first round to late in the second,” but that projection hinges on a big, looping question mark.

“If he decides to go, which I don’t think he should, people are going to have to do an intense check of his medical background,” an NBA Eastern Conference scout told MLive on Tuesday, speaking on the condition of anonymity.

If he chooses to declare for the draft, McGary’s health will be “picked apart in this process” due to an injury classified only as a lower-back condition, according to the scout.