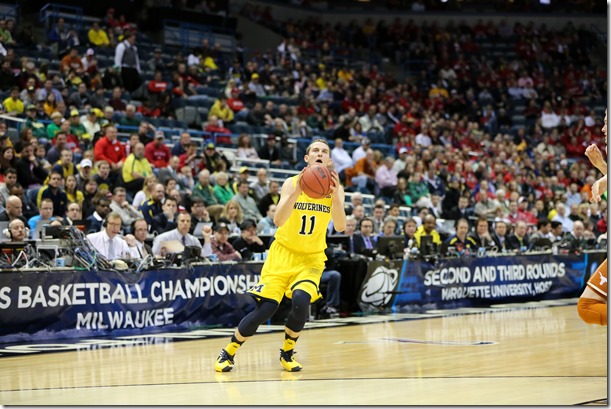 Nik Stauskas was the Big Ten Player of the Year. On a team with many different offensive weapons, he was the most used player on the roster and Michigan’s leading scorer. But more than that, Stauskas was the Wolverine with the spotlight always on him. When Michigan needed a basket late in the clock, it turned to Stauskas; when Stauskas didn’t have a good game, Michigan typically lost.

Before this season began, the offense was full of question marks. The most pressing question had to do with the departure of Michigan’s two great guards, Trey Burke and Tim Hardaway Jr. With those two gone, who was going to be “the man” in Michigan’s offense — the go-to guy? Stauskas didn’t let that question linger for long. By Michigan’s third game, it was obvious he was Michigan’s first option on offense — and the player it turned to in clutch situations down the stretch. Other than a stretch of so-so performances during a five-game period in the Big Ten season, Stauskas did a great job coming through when the Wolverines needed him to. He scored 19 points on 12 shots at Michigan State, blowing kisses to the hostile Izzone as he did so; he hit a game-winning step-back 3-pointer to net Michigan its first win at Wisconsin since 1999; he gave Michigan everything he could in Michigan’s Elite Eight loss to Kentucky, scoring 24 points and hitting four threes in the loss.

Trey Burke and Tim Hardaway Jr. guided the Michigan offense to the number one ranking in efficiency last season. After Mitch McGary went down, the Michigan offense wasn’t supposed to be as good as it was with the two first-round NBA draft picks at the helm — but Stauskas took the reins and made the Wolverine offense even better. It was an incredible year for the Canuck, and it’s why he’s a projected as a potential lottery pick — something no one would have imagined a year ago.

““He’s looking for a perfect play all the time, and shooters gotta shoot it. I mean, he’s a tremendous shooter. Whether he’s turning down ones off the dribble lately because he’s maybe looking for something else, we want him to shoot the ball. (Matt) Costello and (Adreian) Payne are long, when they hedge out they’re still there but you can still shoot over them because you have space. We just encourage him to be more aggressive. Aggressive usually means drive the ball. But shooters shoot when they’re open. Sometimes what’s a bad shot for others is a really good shot for him.” — John Beilein after Michigan defeated Michigan State at home

Grade: A. Stauskas was among the very best offensive talents in the country and he managed to rack up monster scoring totals without excessively high possession usage. In a year where Michigan lost McGary, Burke and Hardaway, it was Stauskas that was ready to step up and carry the team.