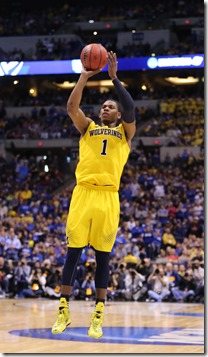 For the fourth offseason in a row, Michigan finds itself in the midst of breathless NBA speculation surrounding key players. (Photo: Dustin Johnston)

Nik Stauskas, Mitch McGary and Glenn Robinson III are all in the process of making their decision between staying in school for another year and leaving to play in the NBA. All three players submitted their names to the NBA Undergraduate Advisory Council, but have yet to hear back – responses are promised by April 14th.

The general consensus holds that Stauskas is a guaranteed first-round pick. McGary and Robinson are not projected nearly as favorably on NBA draft boards as Stauskas, indicating they might have harder decisions to make.

Stauskas is projected as a mid-round pick across the board — as high as 12th and as low as 18th. The projections are more murky for his teammates. McGary is left off of most boards altogether, but he is projected as the 49th pick by Chad Ford and the 33rd by DraftExpress. Robinson is projected in the early second round, recently named in Chad Ford’s ‘next five in’.

John Beilein is hoping his players are paying no mind to the projections and simply focused on making the right decision for them.

“You hope during the course of their education they’re looking at things from a much broader perspective than some guy in his cellar projecting the NBA draft and still living with his mother,” Beilein said during a press conference on Wednesday.

All three players are still in the information-gathering stage, the coach said. And now in his fourth offseason facing these decisions, Beilein said he has become more comfortable with the process.

“I’m a bit more comfortable with it because I know it’s a part of the game and it’s here to stay. Unless the rules change, it’s here to stay. You have no choice,” Beilein said. “It’s like the pick and roll. You can choose to defend it many different ways. If you stay with one thing, they’re going to eat you up with how they do it. You just have to continue to be very versatile in your approach to this.”

The most pertinent question surrounding Mitch McGary and his draft stock is whether or not the big man is finally healthy. After sitting out since January following back surgery, it appears his recovery is on track — but will he be ready in time to show NBA scouts what he can do before the draft?

Beilein said he has been doing individual workouts with McGary, making them longer and longer as he rebuilds his stamina.

It’s still unclear what McGary will decide. But if he is participating in individual workouts with Beilein, that could indicate his readiness to work out in front of NBA teams.

“I would assume if he makes that decision, he is certainly progressing in that direction (to be able to do individual workouts for teams),” Beilein said.

As has already been announced, Michigan will be spending an early stretch of the season playing at the Barclays Center in the Legends Classic next fall. The rest of the schedule for next season is shaping up, and Beilein talked about it at length during his Wednesday press conference.

“We’re trying to get to the point where we’ll have an ACC-Big Ten challenge game here and try to get one more game, similar to Arizona, and then return somewhere else. Our schedule last year I thought turned out to be very difficult and very challenging and appropriate for what we needed. I think this one will be even more challenging.”

Michigan would like to set up another home-and-home matchup going into this season for the non-conference slate, but Beilein said it’s difficult to make those happen because some teams are unwilling to sacrifice a payday if they are packing their arena. Ideally, the coach would prefer two great home games and two great away games every season.

The Wolverines also plan on taking a trip to Europe at the end of this summer. The last time Michigan went to Europe was in 2010.

“We’re going to do (a trip to Europe) in August. We’re really looking forward to that,” Beilein said. “We don’t have all the particulars down, but it will be a four-five game in 10 days thing at the very end of August. That way we can bring the young freshmen with us, which is really big.”

Notes: Beilein expressed a ready willingness to accept transfer players, depending on NBA attrition in this offseason and anticipating more after next season.