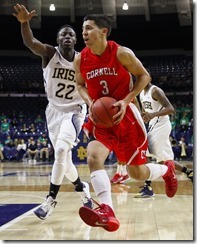 April means transfer season in college basketball and Michigan could have an open scholarship depending on attrition this spring. The Wolverines have already been mentioned with a couple potential targets including West Virginia sophomore Eron Harris and Cornell sophomore Noah Cressler.

Harris won’t be released from West Virginia until the semester is over, so he’s not permitted to be in contact with other schools yet, but expect Michigan to show some interest. Harris was named the top transfer in the country by ESPN and will have almost every school in the Midwest chasing him when he gets his release after averaging 17.2 points per game last season.

Cressler is another interesting candidate. He scored 16.8 points per game for a Cornell team that went 2-26 and the 6-foot-4 guard has offers from Dayton, Rutgers and Vanderbilt with interest from Pitt, Michigan, Notre Dame, Davidson, Butler and Creighton, according to TribLive.com. ESPN ranked him the 9th best transfer in the country

He put up 16.8 points per game this past season for Bill Courtney in the Ivy League and will sit and have two seasons left to play. Cressler is a big, strong guard who is attracting attention from the likes of Vanderbilt, Northwestern and Pittsburgh.

Cressler plans to visit Vanderbilt on April 11th. He fits the mold of a shooter off the bench with some size, but doesn’t have the same impact potential as Harris.

The intrigue of adding an off-guard is obvious for John Beilein and his staff. Even if a transfer has to sit out next season, they could hit the ground running in 2015-16 and provide an insurance policy if Caris LeVert emerges as the NBA Draft prospect many expect.

Here’s some footage of Cressler in action last season with Cornell.

Esa Ahmad is one of the fastest rising prospects in the Midwest. The 6-foot-7 junior for All-Ohio Red had a big high school season and carried that momentum into the NY2LA Swish-n-Dish in Milwaukee.

Ahmad is hearing from a host of major-conference schools and Michigan is making a push for the 6-foot-7 combo forward. He is eyeing spring visits to Michigan, Michigan State, West Virginia, and Wisconsin.

ESPN called him one of the most dominant players in Milwaukee.

Ahmad was probably the most dominant player throughout the tournament. He averaged over 20 points per game for the weekend. He is much improved over last season. He is a mismatch because he is either too quick and skilled or too strong and powerful for whoever is guarding him. He is a big-time player who is on his way to having a stellar summer.

NY2LA Sports was also impressed with his performance.

Ahmad started off the day with a strong performance against Chicago Lockdown then he backed it up with a great game against a very talented Wisconsin Playground Elite team in the evening. Ahmad does just about everything on the floor well. He handles the ball like a guard. He does a great job of getting to the basket when bigger guys try to guard him. Then he finishes well when he gets to the rim.  He had 24 points in the All Ohio Red victory over Playground Elite.

Jalen Brunson rarely disappoints and that’s exactly what you want from a point guard. Brunson went down swinging in the Illinois State Championship game, but he’s back to the grind on the AAU circuit. ESPN writes he could be the best point guard in the country:

Brunson has a chance at being the best PG in the country. The lefty is strong and aggressive. He is great at creating space to get off his shot and is a streaky scorer. He is effective finding open teammates and running a team but looks for his own shots when the offense breaks down. He might have been the best PG in attendance.

Brunson is the leader for a talented Mac Irvin Fire team. The lefty is always patient with the ball. He had a fantastic in-out dribble move to beat a defender in transition. Brunson finished the play and was fouled doing it. He finished with 22 points on the night.

Canadian guard Jamal Murray visited Michigan this spring and is one of many top 2016 prospects looking at the Wolverines.

Murray is playing with the international group at the Nike Hoop Summit and he impressed scouts during the first day of practice.

Perhaps the most impressive player was 17 year-old Jamal Murray, not necessarily for how he impacted the competitive action, but for just how well he shot the ball throughout the day. Throughout the course of the shooting drills, shell drills, and full court games, Murray shot the ball exceptionally well from the perimeter both off the catch and off the dribble to the point that it became surprising when he missed. Standing 6’4.5”, Murray handled the ball at times in the competitive action, and while he struggled against the pressure applied on him by the explosive Emmanuel Mudiay, he made a strong first impression to the scouts in attendance seeing him for the first time with his shot making ability.

Murray measured in at 6-foot-4.5 and 196 pounds at the event and Michigan State, Michigan, Ohio State, Syracuse and Georgetown are some of the top teams in pursuit.

Evan Boudreaux still on the radar

Class of 2015 forward Evan Boudreaux was named First-Team All-State in Illinois and his offer list has continued to grow. Boston College, Iowa, DePaul, Iowa State, Northwestern, Penn State and St. Louis are among some of the bigger schools to extend offers, but Michigan has continued to be in steady contact.

Beilein was in to watch Boudreaux this winter to see him go head-to-head with Jalen Brunson and the Wolverines should continue to evaluate him throughout the spring and summer. He opened spring AAU play with what’s been expected of him:

The versatile forward was a big reason that Team NLP had a chance to beat the Wisconsin Playground Warriors. Boudreaux really battled in the second half. It wasn’t the most efficient game for Boudreaux, but he played well. He finished with 23 points.

Jalen Coleman had a very good junior season after transferring to La Lumiere. He capped off his year at the Dick’s Sporting Goods National Tournament over the weekend.

Coleman didn’t have his customary shooting performance, especially in the first half, but his response to that slow start was most impressive. Even when his shots weren’t falling, he was still scoring, in large part because he was able to mix up his attack, get into the paint and get himself easy points at the free-throw line. Later on, he made a pair of huge 3-point shots with the game on the line, the last of which would have been the game-winner had it not been for Lyle’s shot.