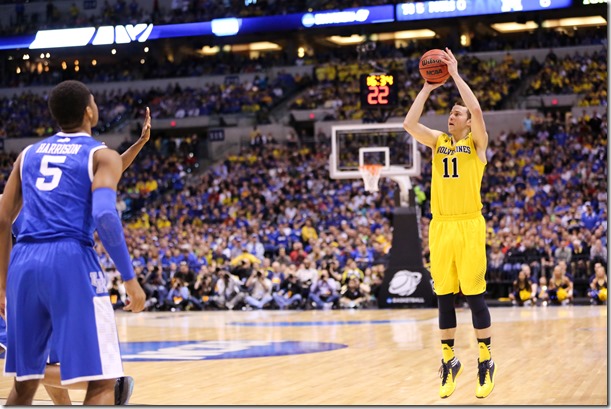 ESPN’s Jeff Goodman is reporting that Nik Stauskas will enter the NBA Draft, but Stauskas and his family denied the report.

Just wanted to reiterate that any reports about my future intenions are FALSE! I have NOT made ANY decisions on my future yet!

His father, Paul Stauskas, told UM Hoops that his son has not made any official decision as of Thursday morning.

“I can tell you for a fact he has made no decision on [entering the NBA Draft or selecting an agent],” Paul Stauskas said via email.

Stauskas received feedback from the NBA Undergraduate Advisory Committee on Wednesday, but has yet to discuss it with his family. The Stauskas family plans to discuss the feedback before making a decision to stay or go pro before announcing sometime in the near future — potentially early next week.

“It’s not easier, but it’s something that we’re comfortable with navigating through,” Beilein said after dealing with early entry candidates for the fourth consecutive off-season. “It’s always going to be something that is very fluid and there’s a lot of emotion in it. You just try to help them make educated decisions.”

Stauskas’ father told Sports Illustrated in January that the NBA was goal.

“He sees the brass ring, like three inches away from his nose,” Paul Stauskas told Sports Illustrated. “He knows all he has to do is keep his nose to the grindstone for another couple of months, and there’s a really good possibility he might be able to go pro. He’s working really hard to achieve that.”

NBA Advisory Committee grades are confidential, but Stauskas is projected as a consensus first-round draft pick by notable mock drafts. The 6-foot-6 sophomore was named Big Ten Player of the Year after averaging 17.5 points, 3.3 assists and 2.9 rebounds per game.