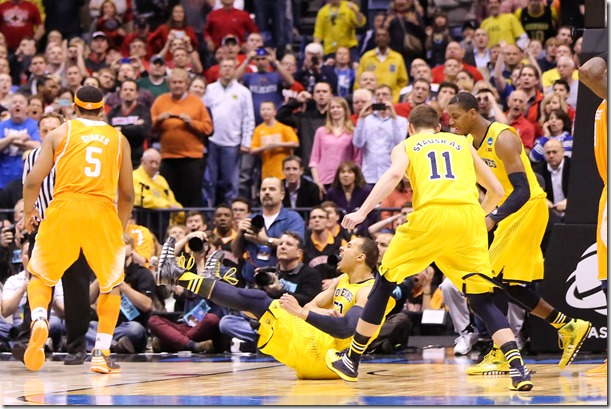 In the final minutes of Michigan’s Sweet Sixteen matchup against Tennessee, the Volunteers cut a once-sizeable Michigan lead into single digits and then finally to a single point. With 10 seconds left in the game, Tennessee inbounded the ball to big man Jarnell Stokes, who faced up Jordan Morgan on the baseline.

While that was an example of a charge call going Michigan’s way, John Beilein said on Wednesday that he didn’t see enough of those calls this past season. During both his press conference and his appearance on the Michigan Insider Wednesday morning, Beilein expressed a desire for the NCAA rules committee to re-examine the changes it made to the block/charge call during the 2013 offseason.

“My hope is that we’ll re-evaluate this entire thing,” Beilein said. “In retrospect now, that was difficult for everybody to add the hand-check foul, which I’m in support of, and the new block/charge rule, which I did not think worked out as well as they had hoped. I expect people to really take a good look at this and decide where they go in the future.”

It’s no secret that charge calls are especially important to Michigan’s defense. Without a shot-blocker protecting the rim and with shaky perimeter defense, often the only way for Michigan to stop an opposing player slashing through the lane was to anticipate where he would be, establish position and take the charge.

The new rules this season made doing that more difficult. They called for a referee to decide whether or not the defensive player had established position before the offensive player had begun his “upward motion” on his shot. This required defenders to be at spots earlier — and it also made officials far more hesitant to call charges. Beilein said he would like to have shot-blockers underneath — and very well might with this new recruiting class.

For now, the coach’s primary concern is what he should teach his players. Beilein believes the rule as it’s currently stated leaves too much room for confusion and leads to inconsistent foul calls. The simply fact is, he saw a few too many calls go against his team this season in block/charge situations.

Beilein said challenging the rule would be done through the NCAA rules committee, and not the National Association of Basketball Coaches.

The block/charge debate is not the only rule weighing heavy on Beilein’s mind this offseason. Going through what is now his fourth straight offseason filled with NBA speculation, Beilein was asked about his feeling regarding the age limit set up by the NCAA requiring players to be one year removed from high school before declaring for the NBA draft.

The coach expressed confidence that there is a better way forward, but wasn’t sure what that was.

“I think everyone’s looking at this situation and knowing it’s not perfect. I sense this,” Beilein said. “I don’t know this, but I have my ear to the ground like all you have your ear to the ground. That there’s going to be a lot of discussion in the next year about, is there a better model for us to go forward. I think everybody agrees there is, but how do we go about it?”

Nik Stauskas, Glenn Robinson III and Mitch McGary are all expected to make announcements regarding their decisions to stay in school or leave for the NBA. Beilein did not confirm whether or not Caris LeVert entered his name for the draft advisory board. There are conflicting reports about Stauskas’ decision, while Robinson and McGary are both projected as much later picks.

As he advises each player on their decision, the age limit and other aspects of the relationship between college basketball and professional basketball has been on Beilein’s mind. He noted an important distinction to make when listening to players talk about playing in the NBA.