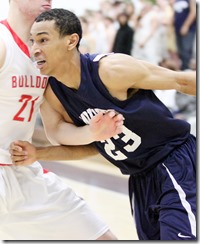 Michigan is pursuing a possible late signing in the 2014 class — Ryan Taylor, a shooting guard currently finishing up a prep year at St. John’s Northwestern Military Academy in Delafield, Wisconsin. Taylor scored a little over 20 points per game during his prep season this winter.

Taylor is a target in line with previous late signees such as Spike Albrecht and Caris LeVert. The coaching staff got on him within the past couple of months and have had steady contact.

We spoke with Taylor on Friday night and he described himself as a good shooter and a player who “loves to play defense.” He said he is working on his slashing ability and foot speed.

Playing his high school ball at Michigan City High School in Indiana, Taylor is also an alum of the SYF AAU program — the training ground of players like Glenn Robinson III, Mitch McGary and Spike Albrecht.

“I know Glenn, Spike and Mitch,” Taylor said during our phone conversation. “And I also somewhat know Max (Bielfeldt) because I played for SYF. And also our mentor is the same person, Wayne Brumm.”

Wayne Brumm is the program director and coach of the SYF AAU team from Northwest Indiana. He guided four current players — Robinson, McGary, Albrecht and Bielfeldt — to the Michigan program. If Taylor is mentored by Brumm, you can bet he’s hearing good things about Michigan.

Taylor never got the opportunity to play with Robinson or McGary in games, Taylor was originally a member of the 2013 class, but went against them in inter-squad practices plenty of times. He said that he has a relationship with them, but “it’s not an every day thing.”

A detail that harkens back to LeVert’s recruitment: Ohio University is the only school that has offered Taylor at this point. The guard said he has also received interest from Creighton and Seton Hall. Even his offer to play at Ohio came circuitously – new Bobcats coach Saul Phillips offered Taylor while he was coach at North Dakota State and asked Taylor to follow him to Ohio.

Taylor said he will be visiting Ohio at some point. He also mentioned that he has already visited Michigan — unofficially, for the home loss against Wisconsin.

“I loved the atmosphere and it was a really nice facility,” Taylor said. “I got to meet the strength trainer (Jon Sanderson). I liked the improvement everyone is making as far as gaining weight and things like that. And also the coaching staff is really great. I can tell the shooting guards — I play shooting guard — the shooting guards are improving year to year tremendously.”

He mentioned Caris LeVert and Nik Stauskas as the obvious examples of such improvement. There’s no question that Michigan is gaining a reputation for being a school where players get better.

The question is, how interested is Michigan? The coaching staff appears to be intrigued by Taylor, but is still waiting to see how things shake out with possible NBA departures before making any commitments.

Michigan assistant Jeff Meyer was at Taylor’s school on Thursday. Taylor said he has talked to him about a potential scholarship offer, but too much is up in the air at this time to say anything definitive.

The Wolverines may have found a late commit in the line of Albrecht and LeVert, but it remains to be seen whether or not Taylor will be in position to receive an offer. One thing is certain: Michigan is the favorite.