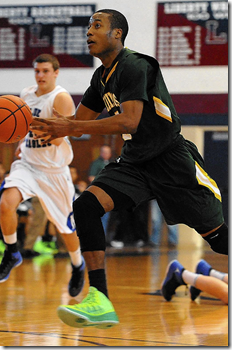 As the spring signing period winds down and Michigan prepares to see off a significant chunk of this season’s roster to the NBA, the coaching staff continues to evaluate more under-the-radar members of the 2014 recruiting class.

The latest blip is Muhammad Ali Abdur-Rahkman, a wing from Allentown, Pennsylvania. Abdur-Rahkman had a monster senior year for his Central Catholic high school team, averaging 23.6 points, 6.2 rebounds and 4.1 assists per game this past season. Before his senior year, Abdur-Rahkman held offers from mostly mid-majors: Bucknell, Drexel, Lehigh and Harvard were all in on his recruitment. But since then, he has caught the attention of some high-major schools. One of them is Michigan.

Abdur-Rahkman has been hearing from Boston College, who he thinks is “going to offer” soon, and places Penn State in the same category. He holds an offer from Rice after the coach who was recruiting him to VCU, Mike Rhoades, became the head coach of the Owls.

Out of all the schools going after him at this late period of his recruitment, Abdur-Rahkman said it was Michigan and Rice whom he was hearing from the most.

“Coach Beilein calls me at least three times a week,” Abdur-Rahkman said. “He just talks about how I play and I have a great feel for the game, stuff like that. And he wants me to come on a visit.”

The Allentown, PA native said he has been in contact with Michigan for a few weeks and confirmed that he plans to visit Michigan officially this weekend after speaking with John Beilein tonight.

Michigan assistant coach Bacari Alexander was at one of his workouts at Central Catholic last Thursday. There they talked about an offer, but Alexander said the coaching staff was still waiting for NBA decisions from Nik Stauskas, Glenn Robinson III and Mitch McGary. Stauskas and Robinson are expected to declare for the NBA Draft on Tuesday.

Abdur-Rahkman would be a slight departure from the prototypical Michigan recruit in that he isn’t known for his shooting. In fact, the graduating senior said that while his shot has improved, he made his living getting to the rim and playing great man-to-man defense.

Even so, Abdur-Rahkman still believes he would fit nicely in Michigan’s offensive scheme. His brother is a Michigan fan, he said, so they often watch Wolverine games together. Abdur-Rahkman noted how Michigan plays as a team.

There is clear interest on both sides of this recruitment. Abdur-Rahkman likes the coaching staff and especially enjoys chatting with John Beilein — even noting Beilein’s coaching style as one of the reasons he would want to go to Michigan.

“He holds everybody accountable and doesn’t let just let one player be selfish or anything,” Abdur-Rahkman said. “So everybody knows how to play together and plays well together. And they develop players.”

Player development has been a key for nearly every recruit talking about Michigan, and it’s no different for Abdur-Rahkman. After seeing the progress players like Nik Stauskas and Caris LeVert made in only one offseason, guards are itching to be coached by the Michigan staff.

“It definitely signals that they develop players all the time,” Abdur-Rahkman said. “They don’t always get the high recruits but they develop them into better players.”

Abdur-Rahkman visited Rice this past weekend and has known the Owls coach for a long time. But a Michigan visit is now planned for this weekend and at this stage in his recruitment, a visit could mean an offer. Should that happen, Abdur-Rahkman was clear about where Michigan ranked among the schools pursuing him.

“(Michigan is) definitely the top school.”