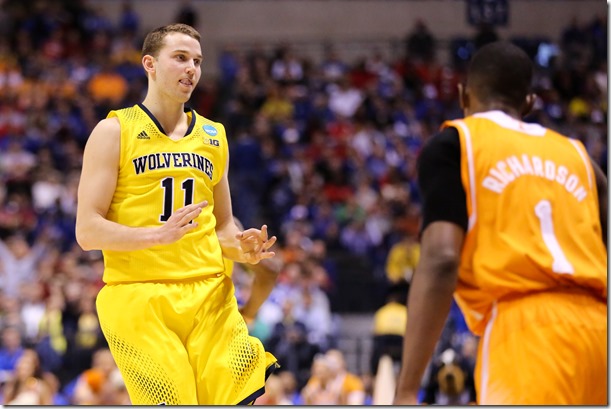 Nik Stauskas and Glenn Robinson III are expected to announce their NBA Draft decisions during a press conference on Tuesday at 3:30 p.m.

Stauskas broke the news on Twitter on Monday evening and the Michigan Athletic Department later announced a ‘Michigan basketball’ press conference at 3:30 p.m. on Tuesday.

ESPN’s Jeff Goodman tweeted that Robinson is also expected to declare for the draft during the same press conference, but Mitch McGary is ‘still wrestling with his decision‘. MLive’s Brendan Quinn confirmed with McGary’s father that he doesn’t plan to announce on Tuesday.

“He’s still back and forth on it,” Tim McGary said.

Tim McGary said he expects to meet with Mitch McGary on Wednesday during Michigan’s annual basketball banquet to discuss the decision further.

“As far as I know, he hasn’t decided anything,” said Tim McGary, who was asked if there was any chance his son would make any announcement during Tuesday’s press conference and joked, “He better not.”

ESPN reported last week that Stauskas would declare for the draft – something Stauskas quickly denied at the time. Stauskas was the Big Ten Player of the Year and is projected as a top-20 pick in the 2014 NBA Draft. Robinson has reportedly selected an agent and is projected on the edge of the first and second rounds. McGary remains undecided and is also projected as a borderline pick after missing most of his sophomore season due to back injury.

Michigan has been evaluating a number of late-bloomers, decommitments and transfers to help deal with potential attrition. (Photo: Dustin Johnston)