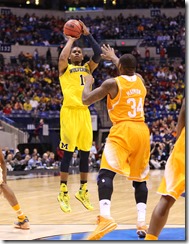 Jake Fischer of Slam Magazine and the Boston Globe is reporting that Michigan sophomore Glenn Robinson III has signed with an agent and will declare for the NBA Draft this week.

CBS Sports’ Gary Parrish reported that “Robinson hasn’t informed the Michigan staff of his intentions yet” and is supposed to meet with the Wolverine coaches this week.

Robinson is projected as a late first or early second-round draft pick and averaged 13.1 points and 4.4 rebounds per game last season.

Source: Michigan soph forward Glenn Robinson III has signed with an agent and will enter the NBA Draft. Press conference coming this week.

ESPN reported last week that fellow sophomore Nik Stauskas would enter the draft, but he denied the reports. Mitch McGary submitted his name to the NBA Undergraduate Advisory Council but has yet to make his NBA decision after missing most of his sophomore year with back surgery. (Photo: Dustin Johnston)