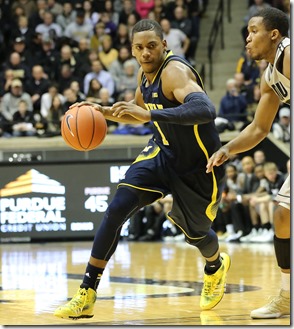 Nik Stauskas and Glenn Robinson III made it official this afternoon and officially entered the NBA Draft. The news was announced in a Michigan press release, both players will meet with the media at 3;30 p.m.

“In a very short period of time, these two young men have had a very positive impact on the Michigan Basketball program,” said Beilein. “From day one, Glenn and Nik have had the right attitude and work ethic that has helped us enjoy so much of our recent success.

“They both understand that they will need to continue to work even harder in the years to come to accomplish their goals in the NBA,” added Beilein. “We will continue to do whatever we can to assist and guide them as they take this next step in their basketball careers. We are excited for Glenn and Nik as they pursue this next stage of their life and begin their professional careers.”

Quotes from Robinson and Stauskas after the jump.

“For as long as I can remember I have had a goal of playing in the NBA, whether it was on my backyard court or winning the Big Ten title at Crisler Center,” said Stauskas. “Following some heartfelt discussions with my family, Coach Beilein and the rest of the coaching staff, I am ready to pursue my goals and begin my NBA career.

“What cannot be understated is how the University of Michigan has helped prepare me for this moment both on and off the court,” continued Stauskas. “This great university took a chance on me and gave me the opportunity to achieve my college basketball dreams. I hope in some small way, I was able provide some lasting moments. As I move forward into this next stage of my life, it cannot be said enough how thankful I am to the Wolverine fans for embracing me. I will always be a Wolverine at heart.”

I have thought a lot about the next step in my career over this past year,” said Robinson. “After talking with my mom, my dad, my grandma, Coach Beilein and the coaching staff, I feel the time is right for me to begin my professional career and declare for the NBA Draft. I am confident I have the work ethic, the talent and maturity to pursue this path successfully.

“It has truly been a blessing to have had the opportunity to attend to the University of Michigan and be part of this basketball program,” added Robinson. “The Wolverine fans and U-M alumni are the best in the world. I have developed many relationships and created so many positive memories that I know will last a lifetime. As excited as I am about my future, I will always be grateful for this wonderful two year experience at the University of Michigan.”

Nik Stauskas was named Big Ten Player of the Year after averaging 17.5 points and 3.3 assists per game as a sophomore. He was selected as an All-American most notable news outlets and was among the most improved players in the country. Stauskas is projected as a top-20 pick in the draft.

Glenn Robinson III considered entering the NBA Draft last spring, but opted to return to school. He improved his per-game scoring average from 11 to 13.1 points per game, but didn’t emerge as the guaranteed lottery pick many expected. Robinson admitted he questioned his decision to return, but managed to find a groove late in the season. Robinson is projected as a late first round or early second round pick.

Robinson and Stauskas combined to start 145 games and led Michigan to a 59-17 record during their two years in Ann Arbor including eight NCAA tournament victories. The Wolverines had just two NCAA tournament wins in the 13 seasons before their class arrived on campus.