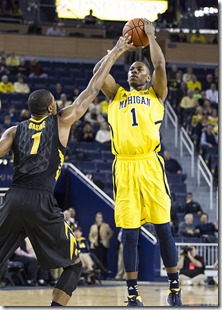 It’s a good thing Tuesday afternoon’s press conference, during which Nik Stauskas and Glenn Robinson III officially announced their intentions to leave school early and declare for the NBA draft, was televised on the Big Ten Network. Otherwise, Michigan fans might have missed out on a couple of agonizing musings by Robinson and Stauskas.

“It would be great if we all stayed just to see those types of opportunities and see what would happen if we all did (stay in school),” Robinson said during the press conference. “It’s crazy to think about. A lot of people want to see that happen, but unfortunately things didn’t work out that way.”

You could almost hear the collective yell of Michigan fans tuning in: “But things could have worked out that way!”

And then there was Nik Stauskas, unintentionally piling on.

“It’s tough because of the amount of success we’ve had during our two years at Michigan,” Stauskas said. “At the same time, imagine the kind of success we could have if we all decided to come back for a third year. You can’t help but think about what that would look like.”

No, if you watch Michigan basketball you really can’t help but think what a team featuring Robinson and Stauskas as juniors, along with Mitch McGary, would look like. That’s precisely what makes Tuesday’s announcement bittersweet. It is rewarding to see two players who have poured themselves into a program achieve their dreams. But along with the departures of Stauskas and Robinson comes the inevitable question of what could have been.

It is probably best to take John Beilein’s advice on that front. When asked if he ever thinks about what his team next year could have looked like with those two returning, Michigan’s coach gave a quintessential Beilein answer.

“Don’t even think about it one bit,” Beilein said.

Instead of thinking about what could have been, focus on what Michigan is now. When Darius Morris was a sophomore — a mere four years ago, mind you — Michigan hadn’t sent a player to the NBA in over a decade. Since Morris left early and was drafted in the second round, Michigan has now sent five players to the League — and counting.

The fact is, Michigan is churning out NBA talent year after year. That is a sign of an extremely healthy program, not a cry of lament. This territory is as unfamiliar to the Michigan coaching staff as it is to Michigan fans, but the staff is learning how to operate in this new paradigm.

“You’re just always trying to find a way to do it,” Beilein said. “It’s a difficult plan for every coach. If the players are really good, they’re going to the NBA, and if it’s not working out, they’re going to another school. Hopefully you’re going to have enough guys that are talented enough to play as a team and win.”

It’s clear, listening to Beilein talk about it, that the process exasperates him somewhat. He is a coach’s coach: he would rather talk basketball than talk NBA draft projections. But in his way, Beilein is learning how to navigate this new reality of Michigan basketball.

“I’ve learned more every year about the process, but I still think every young man is unique,” Beilein said. “We continue to take notes, meet more people, talk with more NBA personnel. The people on the advisory council, we were on speed dial to each other, we know each other well. It’s just like coaching a game. What just happened in that game that I can use in the future?”

Without setting out to be a school that is known as an NBA pipeline, Michigan now finds itself in exactly that role. This has occurred as a result of the outstanding player development taking place in Ann Arbor, and while Beilein has a significant hand in that, his assistants deserve credit for this, as well.

Michigan assistant LaVall Jordan said the overall emotion of the day was excitement.

“It’s good stuff. It’s exciting because we’re excited for the players. Every kid has that dream,” Jordan said of Stauskas and Robinson leaving for the NBA. “You play basketball and you watch it, you have that dream (to play in the NBA). You set a goal, and now to be right there and be ready to go after it is an exciting thing for us to be able to say we had a hand in it. We couldn’t be more proud.”

There is pride in sending players to the NBA as well as pride in watching the program develop in the trajectory its been on for the past few years. This time last offseason is a good reminder of why it doesn’t make sense to get too down about these departures. Michigan watched the National Player of the Year leave for the NBA, and then it watched Tim Hardaway Jr. leave for the pros shortly thereafter. This season, Michigan’s offense got better. In early polls, the Wolverines are ranked in the preseason top-10 for next season.

In short, there is plenty of talent returning to the program next year — and that’s regardless of whether or not Mitch McGary decides to come back. That’s the essential puzzle of the current landscape of college basketball: programs need pros to succeed, success begets early departures for the pros, future pros see that and want to join the program. Rinse and repeat.

So Stauskas is right. Michigan is losing two great players. But the program will be just fine.

“I think we’re leaving this program in great hands,” Stauskas said, gesturing to his teammates standing at the door to the media room. “You look at the guys over there, those are a bunch of hardworking guys who have been through a lot these last couple years. Along with our coaching staff — they’ve shown what they can do with players when they’re willing to work. We’ve got a great recruiting class coming in next year. I feel like this program, it’s still on the rise. I think the amount of things they can achieve is limitless at this point. As long as they stay committed to working and listen to these coaches, I think they’re going to be fine.”

Who knows? They could even end up in the NBA.