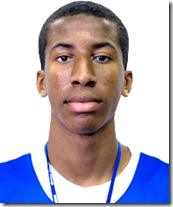 Michigan has watched Ryan Taylor and Muhammad Ali Abdur-Rahkman in recent weeks, and will host Abdur-Rahkman for an official visit this weekend, but the Wolverines have also been checking in on New Hampton guard Aubrey Dawkins.

Dawkins is the son of Stanford head coach and former NBA player, Johnny Dawkins.  The 6-foot-4 guard has a scholarship offer from Dayton and Michigan head coach John Beilein has been in to watch him workout within the last week. The shooting guard averaged 19 points per game his senior season at Palo Alto before transferring to New Hampton for a prep season where he caught Michigan’s eye.

Dawkins plans to visit Michigan and Dayton in the coming weeks, per ESPN’s Adam Finkelstein. Here are highlights of Dawkins in action at New Hampton.

Tavarius Shine is another name to watch. Shine is a 6-foot-6 wing from Fork Union Military Academy that is drawing interest from the Wolverines, according to Finkelstein.

Shine has reported offers from Houston, James Madison, Rutgers and Long Island. Here are highlights of the wing guard at Fork Union this season.

Michigan’s 2015 needs are tough to decipher clearly until the class of 2014 is worked out, but the Wolverines should be expected to extend additional scholarship offers soon.

One candidate for an offer could be Texas guard Matt McQuaid. McQuaid has shown interest in Michigan and plans to choose a college in May. He hasn’t visited Michigan yet, but his father is from the state and he sounds very interested.

McQuaid, whose father grew up in Midland, is patiently weighing his options, which include a strong, growing interest from the University of Michigan. Head coach John Beilein is supposed to make a recruiting visit in the next few weeks. U-M assistant coach Bacari Alexander has been in regular contact with McQuaid over the past several months.

“It’s a lot of fun. This is something you only do once, so I’m going to enjoy (the recruiting process) while it lasts,” Matthew McQuaid said in a phone interview a few days ago. And, yes, Wolverine fans, McQuaid is open to playing at Michigan, which has an offensive system that fits his style of play.

“John Beilein is a great coach,” Rob said. “Not every program has the right system that fits a player, but Michigan has one of those systems that does fit (Matthew).”

Canadian guard Jamal Murray emerged as an elite prospect over the weekend at the Nike Hoop Summit. Here’s footage of Murray, a class of 2016 guard and one of the youngest players at the event, in action.

Murray has had steady interest from Michigan and visited this spring. Here’s an interview discussing his performance at the Hoop Summit and his development.

Most notable prospects in the state of Michigan were in action over the weekend at the Grand Rapids Storm Classic. The Family and 1Nation faced off in the 17U Championship in a game that included Eric Davis, Josh Jackson, AJ Turner and a host of other prospects. Here are highlgihts: