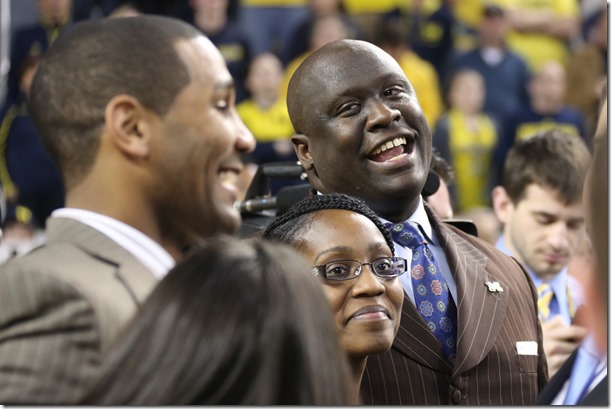 At the moment, Michigan is going after a number of 2014 prospects during this spring signing period. The Wolverines are pursuing Ryan Taylor, Muhammad Ali Abdur-Rahkman and a host of other players in the hopes of shoring up anticipated vacancies in their roster.

Those vacancies are no longer anticipated — with the official announcement that Glenn Robinson III and Nik Stauskas are leaving school early to declare for the NBA draft, those roster spots are real and they are up for grabs.

This means the Michigan staff will be ramping up their recruitment of late 2014 targets even more. With past spring signees featuring the likes of Caris LeVert and Spike Albrecht, the Wolverines have a stellar track record when it comes to identifying under-the-radar talent. That being said, the relationships forged during these recruitments will necessarily be less certain that those formed over the course of months and even years, as is the case with most of Michigan’s already-signed 2014 recruits.

Michigan’s assistant coaches always stress the importance of building relationships during the recruiting process — with recruits, their families, their coaches, and on and on. These forge bonds that simply aren’t there in recruitments that don’t last as long. So how do the coaches compensate for this difference? Rely on whom you know.

Alexander acknowledges the limitations inherent in the hasty recruitments like the ones Michigan is currently engaged in this spring, including that any staff needs a bit of luck for all of them to pan out.

“You rely on word-of-mouth and credible sources. People you know who are maybe around the family or the kid or maybe the coaches that you respect and that have credibility with us. And then we’ve got to do our own intel too,” Jordan said. “We’ve been fortunate. With Spike, with Max, with Caris, with Jon. To get those guys in the spring period — I don’t know if you’d call it luck, but there is probably some luck involved. We try to stay to our core values and our process and do it as expeditiously as possible.”

That being said, Jordan is far from worried about next year’s roster. The assistants present at Tuesday’s press conference were unanimous in their excitement for coaching the remaining Wolverines, as well as the ones who will be entering the program this season.

Jordan couldn’t help but break into what sounded like a spontaneous recruiting pitch when asked if he feels any pressure to replace Stauskas and Robinson.

“We’ve got some guys coming back who I think have a great opportunity in front of them that are willing to put in the work,” Jordan said. “If you look at the roster, with Mark and Max and the incoming freshmen, look at Derrick and Zak and Caris and Spike, there’s a lot of opportunity. It’s always next man up. And you figure if you buy into the program and what we do and believe in what we do, we’ll be fine. Guys just have to make the commitment.”

A couple of players who have made the commitment, and whom Michigan fans are particularly eager to see in action, are incoming freshmen DJ Wilson and Kameron Chatman.

Both players follow closely in line with Michigan’s recruiting philosophy of placing the utmost value on versatility. In fact, Michigan assistant Bacari Alexander said he doesn’t ever want to limit a player by telling him exactly what position he is. Instead, the coach prefers to set players on what he calls a “migration plan,” indicating where they could be.

In the case of Wilson, that could be just about anywhere.

“Our development suggests that (Wilson will) be able to be all over the floor,” Alexander said at Tuesday’s press conference. “There will be times when he may be at the three spot, four spot, five spot. There will be times when he’ll grab rebounds and lead the break, like you’ve seen with Mitch McGary this year. We’re really excited about his skill set, because it’s his skill set that gives him an opportunity to do all those things I described.”

The coaches will get their first looks at these new freshmen – and their new team – when Michigan goes on its foreign tour this summer.

Last time the Wolverines went overseas, in 2010, it touched off an unexpectedly successful season that saw an inexperienced roster win eight of its last ten regular season games and advance to the second round of the NCAA tournament. Alexander is hoping for a similar maturing process during this summer’s tour.

“I’m excited about the foreign tour for two reasons: one, we get to lose a few games to get guys humble from the beginning,” Alexander said with a smile. “I think the other part of that is, we get to start the process of role definition. Seeing what guys can handle in terms of being primary guys, see what guys can handle in terms of roles, see what guys skill sets are. And then that gives us all the data we need to go into preseason practices and start really honing in on improving and enhancing those skill sets.”