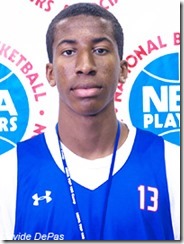 Class of 2014 guard Aubrey Dawkins is set to visit Michigan this weekend, according to a report by Sam Webb.

Dawkins will join Muhammad Ali Abdur-Rahkman on Michigan’s campus this weekend as the Wolverines look to add to their 2014 class. Michigan has two open scholarships in the class of 2014 after Nik Stauskas and Glenn Robinson III opted to enter the NBA Draft after their sophomore seasons.

Dawkins is a 6-foot-4 guard from Palo Alto, California and the son of Stanford head coach Johnny Dawkins. He attended the New Hampton School in Hampton, NH last year.

Dawkins also has a scholarship offer from Dayton.

Here are highlights of Dawkins in action this season at New Hampton.