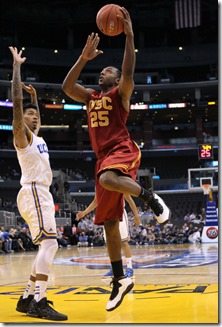 Michigan is pursuing a number of class of 2014 prospects, and will host two on campus this weekend, but the Wolverines continue to be mentioned with transfers as well.

John Beilein was open to the idea of adding a transfer when he met with the media last week.

Two transfers from the West Coast, Cole Huff and Byron Wesley, have mentioned that they are interested in Michigan.

Cole Huff, a 6-foot-8, 205 pound forward from Nevada just finished his sophomore year. He will have two years of eligibility after sitting out next season. Huff averaged 12.4 points and 5.4 rebounds per game as a sophomore, while shooting 50% on twos and 40% on threes (with close to a 50-50 distribution).

According to Huff’s AAU coach, Dayton, Iowa, Creighton, Vanderbilt and Michigan are the “schools he’s most interested in”. Huff has releases to  Creighton, Dayton, Iowa, Michigan and Nebraska, but no visits have been set at this point. Originally barred from transferring anywhere on the West coast, Huff now also has a release to any West coast schools that aren’t in the Mountain West Conference.

Huff wants to play the three to showcase his skillset, but even the four position at Michigan would provide him plenty of freedom.

Huff scored 1.57 points per possession on pick-and-pop scenarios last season with a 76 eFG%, good for the 99th percentile nationally. He also graded out as a good spot up shooter. He’s a a more efficient post-up player than isolation player, but 12% of his offensive possessions were isolations last season.

Byron Wesley is a 6-foot-5 wing from Southern Cal. Wesley led the Trojans in scoring last year at 17.8 points per game and will be immediately eligible to play since he graduates this summer. The Los Angeles Daily News reports that Wesley is considering Indiana and Michigan.

Wesley, who could not be reached for comment, is considering Big Ten schools Indiana and Michigan and should be immediately eligible since he expects to graduate from USC this summer.

Wesley, who averaged 17.8 points per game last season, left the program because he did not know if he would fit in with transfer Katin Reinhardt and star recruit Jordan McLaughlin joining the team next season, sources said.

“This was the opportunity of a lifetime and I couldn’t be more thankful,” Wesley said on twitter.

Wesley is more of a slasher than a shooter. He shot 50% on twos with 326 attempts and 34% on threes with just 68 attempts. He’s a good rebounder and slasher and is a former top-150 player.