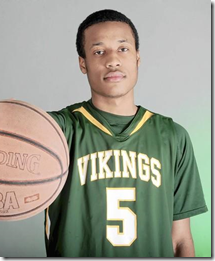 Michigan added another member to its 2014 recruiting class today as Muhammad Ali Abdur-Rahkman committed to John Beilein and the Wolverines.

Abdur-Rahkman was offered a scholarship during his official visit to Michigan this weekend and accepted John Beilein’s offer, announcing his commitment on Twitter.

Abdur-Rahkman is a 6-foot-4 guard from Allentown, Pennsylvania that led his Allentown Catholic Central team to a 29-1 record last season while averaging over 23 points per game. He joins Kameron Chatman, DJ Wilson, Ricky Doyle and Austin Hatch as members of Michigan’s incoming class.

More on Abdur-Rahkman including rankings, background story, scouting reports and video after the jump.

Abdur-Rahkman isn’t a complete unknown in basketball circles, but he flew under the radar. Most national scouts have described Rahkman as a mid-major-plus prospect. That was in line with his offer list before his Michigan visit: Rice, Bucknell, Drexel, Lehigh and Harvard.

But late in April, mid-major prospects can elevate into high-major prospects based on need alone. Penn State, Rutgers and Boston College had all shown interest late and had hoped to get Abdur-Rahkman on campus for official visits.

Abdur-Rahkman had no shortage of high school achievements. He was named to the Pennsylvania Sports Writers All-State team – four times in four years. He averaged 23.6 points, 6.2 rebounds and 4.1 assists per game as a senior and finished with 2,136 career points.

John Beilein loves to discuss birthdays when it comes to recruiting. That can mean very young players that have a lot of potential (i.e. Caris LeVert), but also older players that could be more ready to make an immediate impact (i.e. Zak Irvin, Mitch McGary). Rahkman doesn’t have a prep year under his belt, but he’s definitely older. He’s as old as a member of the 2014 class can be in the state of Pennsylvania and he’ll be 20 before he plays a game at Michigan. That means that while he’s unlikely to undergo any LeVert-esque growth spurt, he could be more ready to play physically from when he arrives on campus.

We published a detailed scouting video and evaluation of Abdur-Rahkman’s game last week:

Abdur-Rahkman is an athletic wing guard that prefers to play with the ball. He’s a great player in transition, but is comfortable in isolation and ball screen scenarios. Despite his lofty high school scoring numbers, he demonstrated an impressive ability to distribute the ball as well. His jump shot is a work in progress, but appears to be progressing in the right direction.

Abdur-Rahkman is a combo guard with great size (6-4, 190 lbs) and he uses that size to his advantage. He excels in the transition especially with the ball in his hands, and loves to push the tempo. Abdur-Rahkman is also a great defensive player due to his length and can guard all three guard positions on the court. His biggest weakness right now is his jump shooting; he’s improving, but still not a great perimeter threat. Scored a lot in high school, but it remains to be seen whether he can do that consistently against players at the high-major level.

Strengths:
He’s extremely versatile with the size and length to offer minutes at any of the three perimeter positions, and is a match-up problem virtually anywhere on the court because he’s capable of making plays for himself and others over top of smaller guards and has the speed, quickness, and handle to go by most bigger wings. He’s equally versatile defensively where his size, length, and ability to cover the court might even be bigger weapons.

Weaknesses:
He’s a dribble drive player on the offensive end, and not yet a consistent outside shooter. That flaw in his offensive repertoire is likely to be exposed much more at the next level when the game slows down and he’s not able to get out in the open floor with the same frequency. Even at that, he’s going to be much more effective in an up-tempo system at the next level.

Abdur-Rahkman adds a jolt of athleticism and depth to Michigan’s backcourt. The Wolverines have Derrick Walton, Caris LeVert, Zak Irvin, Kameron Chatman and Spike Albrecht on the roster next season, but four of those five players could be starters. That leaves hardly any depth at the guard spots. Abdur-Rahkman is a versatile player that can probably back up the two and three spots, while complementing Michigan’s other guards.

Abdur-Rahkman has the tools to be a plus defender and he’s also very comfortable playing with the ball in his hands. Michigan has featured one of the best ball screen offenses in the country in recent seasons and LaVall Jordan will have some nice tools to work with given Rahkman’s size and vision.