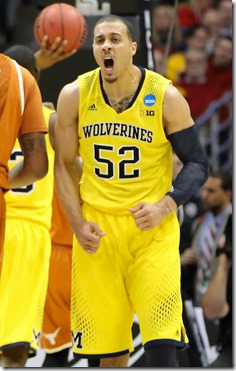 What more can we say about Jordan Morgan’s final season? Michigan’s redshirt senior was the bedrock of this Michigan team in every way but offense: he was the leading rebounder, the quarterback of the defense and the team’s emotional center. Morgan was the consummate leader, and exactly the kind this young, talented team needed; on a team stocked with NBA talent. Morgan was an example of what can happen when you keep your head down and put in the work. (Photo: Dustin Johnston)

The final few regular-season Big Ten games served as an extended send-off for Michigan’s elder statesman. Morgan finished his career having presided over everything from a losing record to a national title game appearance, finally finishing it with a heartbreaking — but somehow edifying — loss to Kentucky in the Elite Eight.

As Michigan climbed its way to the top of the basketball world, Morgan’s own career had its share of ups and downs. The Detroit native came in as an unranked, out-of-shape center recruit, registered a revelatory redshirt freshman season with Darius Morris and then suffered benching as a result of Mitch McGary’s NCAA tournament run last season.

McGary’s back injury touched off a redemptive season for Morgan. He saved his best basketball for his final season, fitting seamlessly into his role as finisher and defensive captain. But it was his play in the NCAA tournament that solidified the legacy of this season for Morgan. He scored as many points (15) as both of Texas’ big men combined and grabbed 10 rebounds over the bigger Longhorns; he outscored both of Tennessee’s highly-touted bigs combined and took what turned out to be a game-winning charge against Jarnell Stokes; finally, he grabbed four offensive rebounds and scored 11 points in limited minutes against Kentucky.

Michigan fans had the privilege of watching a fully-formed basketball player in his physical and intellectual prime this season. The final season of Morgan’s career was fitting, poetic, and hard-earned.

“I mean, you’re talking about five years of emotions all wrapped up into one day. So much work, sweat and adversity that went into this. Years and years of battling. It’s just a constant battle for five years. No matter what it is, whether it’s on the court or off the court, this is a culmination of all that.” — Jordan Morgan after senior night win over Indiana

Jordan Morgan receives the same grade as Nik Stauskas not because their numbers are remotely comparable, but because they each far exceeded the expectations held for them before the season. Morgan led Michigan to its first outright Big Ten championship since 1986 and had an out-of-body experience in the NCAA tournament, going on a tear that willed Michigan to the Eite Eight. This Michigan team was an unmitigated success this season, and Jordan Morgan was its heart and soul.