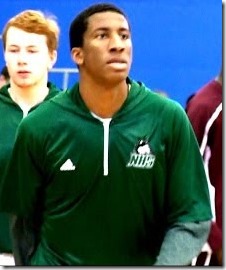 Michigan landed a commitment from Muhammad Ali Abdur-Rahkman on Saturday and extended an offer to Aubrey Dawkins shortly afterward.

While their concurrent visits had been pegged as an ‘either or’ scenario, the fact of the matter is that Michigan isn’t going to host recruits for official visits that they aren’t going to offer – especially at this stage in the process. The Wolverines clearly wanted both prospects in hopes of shoring up their backcourt depth next season.

The move makes sense because Abdur-Rahkman and Dawkins are very different players, despite their similar heights and builds. Abdur-Rahkman is a creator and ball handler, a player who will primarily play the off guard, but could even develop into a point guard down the road.

Dawkins is much more of a traditional three-man in Beilein’s offense. He looks like a player that would play on the wing and is more of a play finisher – dunks and corner threes off of the catch. He could even backup the four position when Michigan goes small.

Assuming that Derrick Walton, Caris LeVert, Zak Irvin, and Kameron Chatman start, Michigan didn’t have a backup guard or wing over six-foot on the roster next season before Abdur-Rahkman’s commitment. Last season Michigan had one true wing backup (Zak Irvin), which resulted in Stauskas, LeVert and Robinson all playing heavy minutes – among the top 13 most in the Big Ten.

Dawkins isn’t a shoe in to take Michigan’s offer either, but the Wolverines made an impression. He will visit Dayton today and the Flyers have prioritized the athletic shooter and have been recruiting him the longest. Marquette is also getting involved and new head coach Steve Wojciechowski has an obvious connection to to Dawkins and his father, former Duke player and coach Johnny Dawkins.

John Beilein is headed to Texas this week to meet with Matthew McQuaid, Austin Grandstaff and Tyler Williams – three class of 2015 wings with the Team Texas Elite AAU program.

The trio of Texans will likely have much of Beilein’s attention during the first open weekend of the Nike EYBL in Sacramento this weekend. Matt McQuaid has spoken highly of Michigan in the past, while Tyler Williams has visited Ann Arbor previously. Grandstaff is the highest rated of the bunch and the Oklahoma State decommit is drawing heavy interest from across the country.

McQuaid has discussed a potential spring visit to Michigan while Grandstaff also could be in the mix for a scholarship offer if he makes the trip to Ann Arbor.

Michigan on the West coast

Michigan assistant coaches were also on the west coast watching some notable class of 2016 prospects.

The Wolverines were in to watch class of 2016 point guard Derryck Thornton Jr. on Monday night. Thornton is one of the top point guard in the class and will be playing with the Oakland Soldiers this summer on the Nike EYBL circuit. Michigan has prioritized Thortnon and there’s serious mutual interest. Thornton has emerged as one of Michigan’s top targets in the class and he’ll likely have the Wolverines full attention on the EYBL circuit.

Michigan was also in to watch T.J. Leaf, one of the top 2016 prospects on the West coast. Indiana, San Diego State, UCLA and Arizona are some of Leaf’s top suitors and the 6-foot-9 forward visited Michigan last fall.