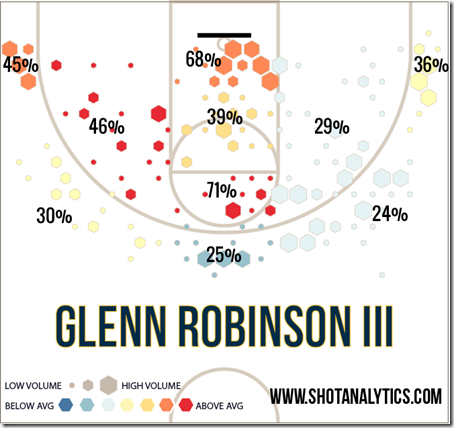 Glenn Robinson III played 76 games in a Michigan uniform and was always been faced with the unenviable task of living up to his potential. He can jump so high, why doesn’t he dominate every game?

As a freshman, Robinson didn’t do much other than dunk. He was one of the best finishers in the country – but almost everything he did was a product of Trey Burke’s offensive abilities. That wasn’t a problem, it was what that team needed. Burke and Hardaway dominated the ball, and Michigan finished the season with the best offense in the country.

This year Robinson was supposed to turn into an offensive star. Judging by his mindset in the offseason, Robinson knew as much.

“I feel like people have only seen one side of my game,” Robinson tweeted last June. “[I] cant wait to see the shock on peoples faces when the see the real GRIII.”

That didn’t quite happen. It was Nik Stauskas, not Robinson, that emerged as Michigan’s superstar and lottery pick. Robinson was arguably Michigan’s third option and he would probably admit that we never saw the “real GRIII”.

But too many are quick to out and out discredit Robinson’s improvement. He still expanded his game as a sophomore and Michigan still had the best offense in the country, despite losing Burke and Hardaway. As a freshman, the Northwest Indiana native used just 15.2% of Michigan’s offensive possessions – classified as a ‘limited role’ by Ken Pomeroy. As a sophomore, he increased his usage rate to 21.2% – ‘significant contributor’ and was still the 8th most efficient player in the Big Ten (>20% usage).

Quotable: “He’s one of the most unselfish players we’ve ever been around, that he accepts this role as he’s so talented, yet he’s all about the team all the time.  And we did a little bit of a straw vote with the team.  They were not going to pick the captain this year.  We thought they were very, very young.  But we were going to pick the captain. But we said, Let’s just see what they’re feeling.  And they were right on.  Jon, Jordan and Glenn was the unanimous pick of all the players as well as the coaches.”

Robinson showed flashes of great basketball this season. He made winning plays and he was more aggressive overall, but it’s impossible to shake the feeling that we never saw his best basketball in a Michigan uniform. He has all of the tools and for whatever reason he was just never able to put everything together consistently as a sophomore.