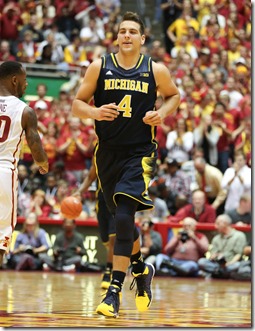 Yahoo! Sports’ Dan Wetzel first reported that Mitch McGary is headed to the NBA Draft after facing a 1 year suspension for failing a NCAA-mandated drug test during the NCAA tournament. This was confirmed in a University of Michigan press release below.

“Mitch has had a tremendous impact on our program from the moment he committed to us,” said Beilein. “He has injected an enthusiasm that cannot be matched. This is why he is loved by the coaching staff, his teammates and Wolverine fans. The progress he has made on and off the court has been outstanding. His willingness to face a personal issue head on and his positive work ethic during his recent injury have helped him to grow in many ways. We know that he will put all of his energy and effort toward achieving his goals. We will continue to assist and support Mitch as he pursues a career in the NBA.”

“My family and I want to thank everyone for giving us privacy and the time to make this decision,” said McGary. “As you know, it was important for us to weigh all the factors that go into something like this. With that being said, I am ready to move on to the next stage in my life and enter the NBA Draft.

“Being a part of a program that values integrity, it is important to let everyone know of a poor decision I recently made. I tested positive for marijuana during the NCAA Tournament. We were notified of that result after the Final Four. I regret thoroughly disappointing my family, coaches and administration. Despite all of this they have been understanding and helpful over the last couple of weeks.

“I take full responsibility for this poor choice and want to apologize to everyone, especially those I have grown close to during my fabulous two years at the University of Michigan.

“I love the University of Michigan and all it has allowed me to do. I have had my ups and downs, especially with my injury this season. I want to thank all the fans for embracing me. This has been the best two years of my life and I have some unbelievable memories. I know that I will be a Wolverine forever. Go Blue.”

The 6-foot-10 sophomore won the hearts of Michigan fans in March of 2013 as he led the Wolverines to the Final Four, but his sophomore season didn’t go as planned. He started the season sidelined with a back injury before playing eight games, only to opt to undergo season ending back surgery in late December.

Reportedly healthy and back to working out, McGary opted to declare for the draft. McGary is projected as a late first round pick despite missing most of his sophomore season.