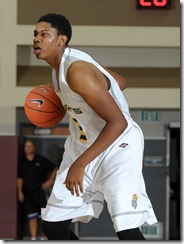 Mitch McGary is headed to the NBA, which means Michigan will have one of the youngest and most unproven frontcourts in college basketball next season.

Mitch McGary, Glenn Robinson III, Jordan Morgan and Jon Horford accounted for about 95% of the available minutes at the four and five positions last season. They are all gone.

Irvin led that group, playing 569 minutes last year, but he only played the four out of necessity last season. Bielfeldt was the only other returning player over 6-foot-6 on Michigan’s roster to log minutes (89) last season while the other four have freshman eligibility and have never played in a college game.

In an ideal world, McGary would have come back and manned the five spot. Jon Horford would have backed him up, providing the perfect transitional opportunity for Michigan’s young frontcourt players. Donnal, Wilson and Doyle could have added strength, quickness and agility while learning under experienced players that had been through the rigors of a Big Ten season.

Donnal, Wilson and Doyle were supposed to be thrown into the mix in 2015-16, not in 2014-15. But that doesn’t changed the fact that this group is, and always was, the future of Michigan’s frontcourt.

There were many questions as to why Michigan was chasing guards and wings instead of post players in the late signing period, but they are already on the roster. The Wolverines incoming class is heavy on bigs and Mark Donnal was a top-100 recruit with a redshirt year. Five of Michigan’s 11 scholarship players next season are likely to play the four or five positions. Michigan is all-in with its young bigs.

Kameron Chatman is Michigan’s highest rated front court player and he measured in at 6-foot-8, 213 pounds at the Jordan Brand Classic. He appears to be the perfect fit for the four spot at Michigan. He’s skinny, but he rebounds (9.8 rebounds per game in the Nike EYBL). He’s a lefty, which makes him a perfect fit to play on the right side of the floor for John Beilein.

Chatman is the sort of player that could start his career at the four position and end his career playing point guard. Bacari Alexander compared him to Jalen Rose in early April. Regardless of where Chatman projects, Michigan needs him in the frontcourt this season.

Mark Donnal looks like the natural fit to slide into the starting five-spot in Michigan’s offense. Donnal was listed at 6-foot-9, 230 pounds before the season and added weight, strength and athleticism thanks to an entire year in the weight room with Jon Sanderson. Donnal provides something that Michigan’s five men have lacked since DeShawn Sims: a reliable three-point jumpshot.

“Mark is still 18 years old right now. So that is very encouraging to us. Every day when our guys were out shooting around, he was finishing a mammoth lift with John Sanderson in the weight room. Mark will take coaching and move it right away,” John Beilein said earlier this month. “When in doubt, he shoots it — and it goes in. He’s got great instincts, as he learns other parts of the game”

Ricky Doyle has been praised by John Beilein for his more traditional game. Doyle is a  back to the basket big man that has an array of post moves and can even step out and knock down 15-footers. Doyle could struggle with the pace and athleticism at the Big Ten level, which could manifest itself defensively and on the glass.

“We love that Ricky can play in both high and low post,” Beilein said when Doyle signed his letter of intent. “He has a tremendous feel for the game whether he is on the perimeter or with his back to the basket. He loves contact so he is a great fit for Big Ten basketball. Our fans will love Ricky’s ‘old school approach’ to playing the game.”

Max Bielfeldt has never played a significant role for Michigan and lacks some of the height to make an impact at the center position, but he’s Michigan’s most experienced player. Reports from practice are that he has a reliable jump shot and John Beilein commented on his gamewhen he was thrown into the fire in the Big Ten Tournament final.

“Max is really good in practice every day,” Beilein said in March. “We can’t stop his three‑point shooting.  In practice, he’s done some really good things.  So I thought he carried himself really well.”

DJ Wilson projects as a stretch-four man, but he will bring an influx of athleticism to Michigan’s front line. He needs serious strength and conditioning, but he can run the floor, finish above the rim and step out and knock down jump shots.

“When you look at DJ Wilson in particular, I think he’s a multifaceted forward that can play inside and out,” Bacari Alexander said earlier this month. “What we try to do here at Michigan is we try to give our guys some type of migration plan and not just say you’re just a straight center, or your just a straight this guy. Our development suggests that he’ll be all over the floor. There will be times when he may be at the three spot, four spot, five spot. There will be times when he grabs rebounds and leads the break like you saw with Mitch McGary this year. We’re excited about his skill set.”

Michigan will have the opportunity for some extra practice this summer when it travels to Italy for a foreign tour. The tour should be invaluable for Michigan’s inexperienced front line, that hasn’t been tested at a college level.

“I’m excited about the foreign tour for two reasons,” Alexander explained. “One we get to lose a few games to get guys humble from the beginning. I think the other part of things is that we get to start the process of role definition. See what guys can handle in terms of being primary guys, in terms of roles. See where the skill sets are then it gives us all of the data we need to go into our preseason practices and start honing in on improving and enhancing those skill sets.”

The last time Michigan went to Europe was in Summer of 2010. The Wolverines were coming off of a losing season and were going to rely on a starting frontcourt that featured redshirt freshman Jordan Morgan, true freshman Evan Smotrycz and 6-foot-5 Zack Novak. Michigan went 1-3 in overseas, taking some rough defeats, but grew up in the process. The Wolverines returned home and finished the season on a tear, making the NCAA tournament and advancing to the round of 32.

Mitch McGary would have made Michigan a great team next year, and the Wolverines might still be just fine. The backcourt group of Derrick Walton, Caris LeVert and Zak Irvin is ready to step into the limelight and while the frontcourt is inexperienced, they are going to be fixtures in the Michigan program for years to come.