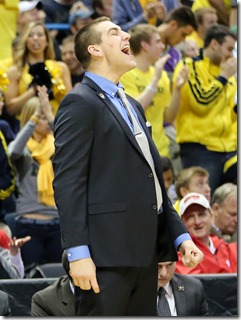 For three weeks, Mitch McGary was at the center of the college basketball universe. That was a little over a year ago. It feels like an eternity.

When Michigan fans look back on McGary’s brief and wondrous career as a Wolverine, those three weeks will likely be what they think of first. There was his dominant performance against VCU, the first game in which he showed the true breadth of his prodigious talent. I recall saying his stat line to myself out loud to convince myself it actually happened: 21 points, 14 rebounds, one missed shot. He was somehow even better against Kansas and senior center Jeff Withey. His dismantling of the vaunted Syracuse 2-3 zone forced Jim Boeheim to make serious adjustments at halftime, but it was too late — Michigan was going to the national title game.

Trey Burke was transcendent that year, but no Michigan player had an NCAA tournament performance quite like McGary’s. The confluence of fortuitous events that facilitated his late-March revelation — finally reaching game shape, finally becoming fully healthy, finally just getting it — was what got Michigan to the final game.

Unfortunately, it is there that McGary’s basketball legacy at Michigan effectively ends. McGary announced on Friday that he will be forgoing his final two years of eligibility and declaring for the NBA draft. This after a year in which he played in only eight games before undergoing season-ending back surgery.

His departure carries with it an element of coercion, courtesy of the NCAA. According to an article published by Dan Wetzel of Yahoo! Sports, McGary smoked pot in March, before the NCAA tournament. He was randomly drug tested by the NCAA two weeks later after Michigan’s Sweet Sixteen victory over Tennessee and failed the test. The penalty for failing an NCAA-administered drug test, for a first-time offender, is a one-year suspension. This penalty stands in stark contrast to a failed drug test administered by the school, which for a first-time offender would have been a three-game suspension.

Schools are allowed to work out their own drug-enforcement policies, as long as they adhere to them; Michigan’s is viewed as one on the stricter side of the spectrum. Because the drug test took place during an NCAA event and not during the course of the regular season, it was administered by the NCAA, not the school. So McGary is penalized by the NCAA, not Michigan.

The severity of the penalty, especially for a first-time offense, is alarming. For an organization that governs the athletic activity of mostly 18-to-22-year-olds, it feels downright draconian. “The NCAA really doesn’t show any mercy,” McGary said to Wetzel. It doesn’t, and it should.

That being said, it doesn’t matter, substantively, what McGary or you or I think of the rule. It’s on the books; it must be followed.

The whole situation is just sad. McGary made a poor decision, the kind every person his age has undoubtedly made. He is now paying, perhaps extravagantly, for his actions. And there is no doubt about it – this turn of events influenced his decision to forgo his final two years and declare for the NBA draft.

How much influence the failed drug test had is up for debate. McGary did not hold a press conference, so we couldn’t ask him. He never told Weztel he would have returned to Michigan if he hadn’t failed the drug test – the most he said on the subject was that he would have “possibly thought about coming back.” It doesn’t seem wise to assume he would be back in school next year had it not been for the failed test, but that isn’t really the point. What’s unfortunate is that such an important decision was influenced at all by such a careless, and common, misstep.

Of course, there is a good chance McGary can turn things around in individual workouts in preparation for the draft. If he is truly healthy, and Michigan coach John Beilein has said that he is, McGary will get a chance to display his dazzling skill set in front of NBA scouts. Players with McGary’s combination of size, coordination and basketball smarts don’t come around that often. And in the bizarro world of NBA scouting, the less the league knows about you, the better. All the NBA has to go on are these individual workouts and those threes weeks in March one year ago. Both are now seen through the lens of back surgery, but they will still impress.

Outside of his sublime NCAA tournament run, this failed drug test and subsequent departure caps a Michigan career that has been tragic, in a sense. McGary had the option to leave for the NBA and be a lottery pick after his freshman year – which, in retrospect, was the obvious choice – but he decided to return.  Then came the injury, which everyone knew would impact his draft stock. And now this. It just makes you feel for the guy.

It sounds strange to characterize the career of a man who seemed to be constantly grinning as tragic, and maybe it’s unfair to remember his career that way. Perhaps it’s best to remember his career for the way he played: relentless and somehow carefree, almost self-forgetting. Because those who watched it will not remember McGary’s career for this unfortunate day. It will be remembered in images of him galloping up and down the court, the bull in the china shop paving the way to the national title game.