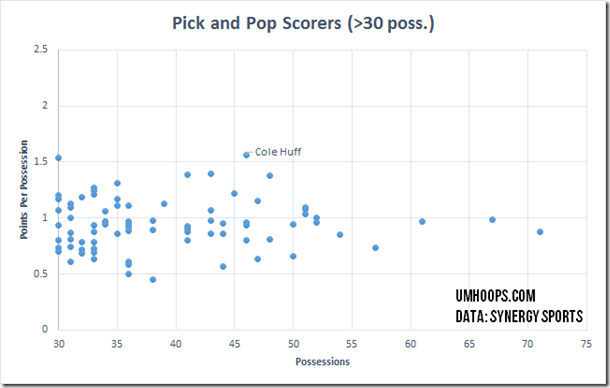 Cole Huff will play his future college basketball in the Midwest. The 6-foot-9 Nevada transfer won his appeal to transfer to schools closer to home on the West coast, including UCLA and USC, but his AAU coach tweeted that his final four schools were Creighton, Dayton, Iowa and Michigan.

Huff will visit Creighton on April 27th, Iowa on May 2nd, and Dayton on May 9th. A Michigan visit has yet to be set. Huff told MLive.com that Michigan is waiting to see what happens with the Aubrey Dawkins recruitment and Mitch McGary’s NBA decision, before scheduling a visit.

Michigan assistant coach LaVall Jordan met with Huff on Thursday and made an impression.

“The meeting was good,” Huff told MLive. “It was nice of him to come out here and we had a good conversation. He talked about the opportunities they can offer, but really, when it comes to Michigan, you don’t need a coach to talk to you too much because of all that tradition. It was just an added bonus to have coach Jordan come out here and give me the specifics.”

Huff would have to sit out a year due to NCAA transfer rules, but he would have two years of eligibility remaining. The 6-foot-8 sophomore averaged 12.4 points and 5.4 rebounds per game while shooting 40.3% on threes last season.

Huff is the most efficient pick-and-pop scorer in the country that ran at least 30 possessions of pick-and-pop action last season.

Huff wants to prove there’s more to his game than the pick-and-pop.

“It was more about how I was being used (in the system),” Huff told MLive. “Nevada did a great job using me as a pick-and-pop player and putting me down low with my back to the basket, but that’s not all of who I am. I think I can be used for more than that.”

He was great spotting up last season – either on catch and shoot opportunities or driving to the basket. Huff graded out in just the 29th percentile last season in isolation drives, but was an above average post scorer. He would provide a dynamic and versatile stretch four option for the Wolverines.

Rivals updated their class of 2014 recruiting rankings and Kameron Chatman and DJ Wilson both saw their stock rise. Chatman moved all the way up to the No. 25 spot, ranked as the top four-star recruit in the country. Wilson jumped into the top-100 and is now ranked No. 86 overall with a fourth star.

Chatman moved up to No. 30 in 247Sports’ updated rankings, also occupying their top four-star spot. Ricky Doyle is ranked 207th by 247Sports and Wilson 243rd.

Muhammad Ali Abdur-Rahkman hasn’t jumped onto the national radar, but Steve Keller of National Recruiting Report and the Hoop Group thinks Abdur-Rahkman is worthy of being ranked in the top-150.

Aubrey Dawkins wrapped his official visit to Dayton this week, now having visited his top two schools. Dayton has been recruiting Dawkins the longest, but Michigan obviously brings plenty to the table. The 6-foot-5 forward is expected to make a decision in the coming days. Dawkins took an official visit to Michigan last weekend along with Muhammad Ali Abdur-Rahkman.

Dawkins projects as a three (or even four in a pinch) man in Michigan’s offense and has great athleticism and a reliable jump shot.

Michigan currently has one scholarship to give in the class of 2014, but could have another open depending on Mitch McGary’s NBA decision.

The only live evaluation period this spring tips off this weekend. Coaches will be on the road at numerous AAU events across the country, but the majority of the country’s best talent will be at the Nike EYBL stop in Sacrament, California.

Michigan offers Jalen Brunson (Mac Irvin Fire) and Jalen Coleman (All Ohio Red) will both be playing in the EYBL this season, but a number of other prospects will be evaluated closely.

2016 stars Tyus Battle (Team Scan) and Derryck Thornton Jr. (Oakland Soldiers) should also demand top attention from Michigan as two of the top players in the class of 2016.