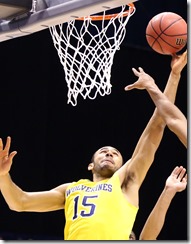 Former Michigan center Jon Horford will finish his collegiate career at Florida. The news was first reported by Jeff Goodman of ESPN.

Horford averaged 3.8 points and 4.2 rebounds for the Wolverines last season.

Horford had played a reserve role throughout his career, but could have played a significant role next season after the departures of Mitch McGary and Jordan Morgan.

Instead Michigan is expected to rely on redshirt junior Max Bielfeldt, redshirt freshman Mark Donnal and true freshman Ricky Doyle for minutes at the five position.

The 6-foot-10 big man is eligible to play for Florida immediately as he completes a graduate transfer. Horford’s brother, Al, previously starred at Florida and helped the Gators to two national championships. He transferred in search of an offense that will feature his back-to-the-basket abilities more prominently and Florida could be a decent fit. Just 2.7% of Michigan’s offensive possessions last season were post-ups compared to 10.8% of Florida’s, per Synergy Sports. (Photo: Dustin Johnston)