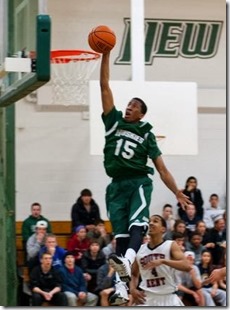 Michigan added another member to its 2014 recruiting class today as Aubrey Dawkins committed to the Wolverines. The news was first reported by FlyerHoops.

Michigan had been searching for depth after Nik Stauskas, Glenn Robinson III and Mitch McGary declared for the NBA Draft this month. Dawkins should provide athleticism and shooting ability from the wing with a solid 6-foot-5 frame, projecting to the three and possibly four positions in Michigan’s offense.

Dawkins was offered a scholarship during his official visit to Michigan two weeks ago and accepted John Beilein’s offer after visiting Dayton last week.

More on Dawkins including rankings, background story, scouting reports and video after the jump.

Dawkins is the son of Stanford head coach, and former NBA player, Johnny Dawkins. He transferred from Palo Alto High School, where he averaged over 18 points per game, to New Hampton School for a prep-year. Dawkins averaged 13 points per game at New Hampton, playing in the NEPSAC – one of the top prep school conferences in the country.

Dawkins picked Michigan over Dayton and Archie Millers’ staff had prioritized Dawkins for quite some time. Many other schools had shown interest this spring after Dawkins had a very strong finish to his prep season at New Hampton.

Dawkins brings perimeter shooting and athleticism to the table. He’s an above the rim finisher and his three-point stroke looks fairly consistent. He has good size at 6-foot-5 and should be able to develop into a plus defender down the road. He has a good feel for the game, moving off the ball to get open off of screens or with back cuts, but the hole in Dawkins’ game appears to be off the bounce. In the film we watched, he wasn’t aggressive attacking the rim off the dribble. He didn’t show much of a mid-range game, primarily settling for threes, finishing at the rim, or passing the ball along the perimeter.

New England Recruiting Report was impressed with Dawkins at the NPSI (where Michigan watched him earlier this year):

The six-foot-six post-graduate had all parts of his game clicking.  He was hot from behind the arc and athletic in transition, but equally important was the level of energy he was able to provide his team on both ends of the floor.  He finished with 28 points, 7 rebounds, and 3 steals.

Dawkins was rated the 19th best prospect in New England by the New England Recruiting Report.

Dawkins adds athleticism and shooting to Michigan’s roster on the wing. He looks to be more of a three than a two, potentially even sliding to the four spot, because he’s a better player off the ball. Michigan coaches have always placed a premium on perimeter shooting and Dawkins clearly brings that to the table. He’s a great catch-and-shoot player, but he’s also a great finisher.

Michigan lacks backcourt depth for the 2014-15 season as Derrick Walton, Caris LeVert, Zak Irvin and Kameron Chatman could all be starters, leaving Spike Albrecht as the only backup guard option. Dawkins (and Abdur-Rahkman) both add depth to the equation and bring different things to the table. While Abdur-Rahkman is a better slasher and creator, Dawkins should excel in a jumpshooting role while providing energy off the bench.

Dawkins will be one of seven players with freshman eligibility on Michigan’s roster next season. Michigan still has one additional scholarship to give which could be slotted for Nevada transfer Cole Huff. Huff will have to sit out a season due to NCAA transfer regulations.