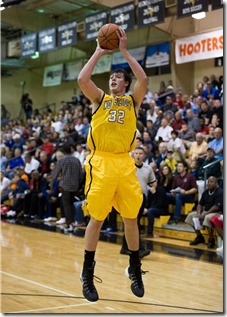 Ricky Doyle is Michigan’s longest-standing commit in the 2014 class (excluding Austin Hatch who reclassified). Doyle committed over a year ago after his first visit to Michigan and his first visit to a school outside of Florida. Toiling in relative obscurity since then due to his abstention from AAU ball, Doyle had an extremely productive season for his Bishop Verot high school team. The 6-foot-10 big man scored 25 points and pulled down 10 rebounds per game in his final year. At Michigan, he will be looking to provide the Wolverines with something that was lacking this past season: a low-post offensive threat. We spoke with Doyle on Sunday for the second installment of  our “Getting to Know” feature for the 2014 recruiting class.

You were very productive this season for Bishop Verot. Where did your game grow this past year?

I think I’ve gotten a lot better at dribbling. With our team, kind of taking over the game, I would say. I’m the one who has to score the last-second shot and being able to play under that kind of pressure. A lot of times, also seeing the floor. A lot of times I’ll be double-teamed, triple-teamed, and able to find that open guy with that vision on the court. And even getting myself open in those situations.

Coach Beilein says you have an “old school” approach to the game. Do you agree?

Yeah. My style of play is, I would say, contact first. Inside first, then out. I look for feeling things out to get me better position closer to the basket. If that doesn’t happen, then come out and ask for the ball. I would say I’m more of a contact seeker. You know, I go for the contact, I go for the foul.

Michigan has had some players jump to the NBA, including Mitch McGary. This opens up for opportunities for you guys coming in. Is that something that excites you?

Of course. I would love to go there my first year and contribute and play. But you know, anything can happen, really. Right now, I’m working as hard as I can. I’ve been doing this three-month program with John Sanderson, the strength coach up there. I’m on a program with him, so I’ve been working out really hard. So right now I’m probably weighing in at about 255.

What sort of stuff does coach Sanderson have you doing?

A lot of Olympic exercises. I’m doing a lot of squats, front squats, power cleans, all that stuff. The same things that the guys are doing now up there. I just want to, you know, walk right in and fit right in.

Have you noticed a difference in your game after being in this program?

Oh, definitely. It’s crazy. Right now, I’m also doing open gym at FGCU, which is the local college here around my house. You know, Dunk City. I go to a lot of open gyms and I play with a lot of the guys up there. These workouts, they’re making me feel like, whoa — I’ve never been able to go to the basket that fast before. I find myself a lot more open, being a lot more athletic on the court now, just from working out as hard as I’ve been. I’ve been doing a lot of line drills, sprints, suicides. I’m working my butt off (laughs).

Is it a relief to be done with high school ball and able to focus completely on preparing for the college game?

Definitely. It’s just a lot more time to concentrate. I can really let go in the weight room, lift hard. After working out, I can go run sprints. And now I have a lot more free time, so I’m running a lot more with the college guys, getting used to that speed, that level of the game. It’s going really well, actually.

Is it exciting for you to see Michigan players jumping to the NBA?

Those guys are going into the draft for a reason. I mean, they worked for it. They worked so hard. I’m going to be trying to do exactly what they did and just work as hard as I can. Then if going to the League or playing in the NBA is an option, then hey, that’s awesome. Nothing else more to say. I’m just going to keep working as hard as I can and see how things go.

What do you talk about with the Michigan coaching staff at this point?

I talk to coach Beilein and coach BA (Bacari Alexander) a lot. I always ask them, hey coach, what should I be working on now to be ready when I’m there. They just keep giving me a whole bunch of stuff and I keep doing it. I talk to coach BA, I even talked to him throughout my season about where my head should be and my mindset. A couple games, I’d come home all frustrated and I’d call coach BA, and he’d give me a little talk, help calm me down and put my head in the right place.

When will you be getting to Ann Arbor?

I’m coming to Ann Arbor, I think I have to sign in by June 22nd. So I think we may be leaving Florida here a little earlier than that, like probably around June 15th or so. So we get up there and there’s no pressure. I’m doing the Bridge program that most of the athletes do. Yeah, I’m really looking forward to it. For my high school right now, the seniors have abut two weeks until we’re done with tests and finals and stuff. I might actually be getting out a little earlier since I have straight A’s. I might not have to take the finals.

When you watched Michigan’s games in the NCAA tournament, were you thinking about what you can bring to the team?

Definitely. I sit down and watch the games, and some areas I’ll play it back and think, what would I do in that situation? I’ll probably watch a game over a second time to just see what I would do in that situation. Recently I’ve been getting very confident with the ball and attacking the basket because I’m trying to get on that foul line. What would help the team, trying to get the team in the double bonus, all this other stuff.

Who are you pulling for in the NBA playoffs?

What’s something not related to basketball that Michigan fans might not know about you?

I love fishing. A lot of times when I have free time, I’ll go out fishing.

What have you caught?

All kinds of stuff. My buddy has a lake behind his house, and we’ll go bass fishing. Or I have a boat and we have a river, the Caloosahatchee River here, and I’ll go on that and catch some snapper. Maybe if I’m feeling really adventurous I’ll go shark fishing.

I don’t really have a specific genre that I listen to. I just listen to, you know, whatever’s on the radio. I don’t know.

What is your best sport besides basketball?

Before basketball, I used to be a competitive swimmer. I did freestyle and butterfly.

Do you see yourself in anyone playing in the NBA right now?

Yeah, I have a lot of role models in the league, and a lot of players I really look at. I watch them play and really try to take what they do on the court and try that stuff. I would say Kevin Love is a good one to watch. His playing style, he’s able to use his body and box out to get rebounds. Offensively, how well he can shoot the three and how he’s able to score inside and stuff. Blake Griffin, he’s a fun one to watch, how he just attacks the basket on everyone. I’d say another one is Dirk Nowitzki and his face-up game.

Who has been an inspiration to you throughout your basketball career?

That’s an easy question. That’s my parents. They’ve had my back all throughout my life. They’ve really helped me to become who I am today.

I would say the best advice I’ve received is from my father. He told me that if you really love something, go for it. When I was little and younger, I was playing basketball, and I wasn’t really sure if I wanted to play. He was like, hey, if you don’t like the game, you don’t have to play it. I don’t want to push you into playing something. But if you really want to play and you really want to become good, you’re going to have to love the game. Ever since then, I’ve really fallen in love with the game and I try to get better every day.