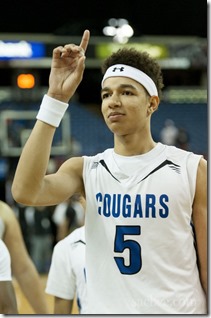 DJ Wilson committed to Michigan on October 6th and since then his stock has shot up exponentially. The Sacramento native was injured for six months out of his junior year of high school, causing him to fly under the radar for a bit. But once he hit the court, he showed exactly why John Beilein and the Michigan coaching staff decided he was worthy of an offer. Playing for Capital Christian School, Wilson led his team to the NorCal Open final game, where he scored 29 points, grabbing 10 rebounds and swatting four shots in a tough loss to Bishop O’Dowd. He had a terrific overall season, averaging 14 points per game. We caught up with Wilson for the third installment of our “Getting to know” segment for the 2014 recruiting class.

Tell me about Capital Christian’s season. What did you learn from this final year of high school ball?

You had one of your best games in the NorCal Open final, but you had a very good overall season. Where did you improve this year?

I think coming into this season, especially in the playoffs, I just really stopped thinking and started playing my game. Those were the best games of my season. I mean, I think I’ve improved rebounding. I like to play on the perimeter but me being the biggest kids on my team, I had to play down low. So going up against other bigs from other teams just helped me a lot physically and just boxing out, things of that sort.

You were able to move up in the rankings, into the top-100. Is that something you keep track of?

Nah, I don’t keep track of rankings. I really couldn’t care less about them. It’s whatever. Everybody proves themselves at the next level, so we’ll see.

Michigan has had a few guys jump to the NBA. This leaves some minutes and opportunities for you freshmen coming in. Does this excite you?

Yeah, it does. It just means I have to work that much harder to earn minutes. I’ve been talking with Kam (Chatman) too, and we just talked about how ready we are and how much we prepared this year for next year. We’re just going to try our best next year to get as many minutes as we can, whether that’s starting or coming off the bench.

When you see guys like Glenn Robinson III, Mitch McGary and Nik Stauskas jumping to the NBA, is that something that excites you as a player entering a program that has routinely sent guys to the League?

Yeah it does. Probably the number one thing I think about is just player development. Because they’re good at finding the players who have been overlooked and stuff like that and helping them develop like Glenn and Nik. I mean, Nik is probably going to be a lottery pick. So just buying in fully to what the coaching staff did pays off.

Michigan assistant coach Bacari Alexander said he expects you to be able to play nearly anywhere on the court. Is that how you see yourself?

Do you feel more comfortable at any particular spot?

Have you been keeping in contact with the coaching staff this offseason?

Yeah, I have. I talk to all of them. I just saw coach Beilein [over the weekend] because I was at this EYBL tournament and he came down to watch. So I talked with him, met up with him yesterday and today. And then I met up with coach LaVall Jordan today and I’ll probably see him tomorrow. I’ve talked to coach Alexander and coach Meyer, as well.

Did you watch Michigan in the NCAA tournament?

Yeah, I watched some of those games.

When you watch those games, are you thinking about what role you could play on the team, or are you just enjoying the games?

I’m doing a little bit of both. I’m watching, but at the same time, I’m looking at what the team is doing, where I could see myself at that particular moment, things like that.

You and Kam Chatman hung out at the EYBL over the weekend. How well do you guys know each other?

We’ve played against each other since like, sixth or seventh grade, but we didn’t really communicate at all after that. Just recently, when we both committed and stuff like that, we got in touch. Now, he’s down here in Sac and he’s spending the weekend at my house. So we’re getting to know each other better. Getting that bond.

Are you pulling for anyone in the NBA playoffs?

What is something off the court Michigan fans don’t know about you?

You play any video games?

Not really. If I’m hanging out with my friends, it’s usually my teammates. So we probably go up to the gym or something like that and hoop.

Yeah. My favorite artists probably have to be J. Cole and LeCrae.

My favorite movie by far is probably Space Jam. All the basketball movies, like Coach Carter, Glory Road, things like that.

What about TV shows?

My TV stays on SportsCenter.

Did you ever play a sport aside from basketball?

When you watch the NBA, do you see yourself in certain players?

Yeah, just certain things I can do. Obviously like Kevin Durant, players like that who are long, lanky and have a diverse skill set and can do it all.

Any idea what you’ll study at Michigan?

I have no idea yet. I’m going in undecided.

Who has been an inspiration for you in your basketball career?

My mom and my godfather.

It would probably have to be what my godfather told me. He always told me to never worry about anybody else or the rankings. Just play my game and success will come. He’s been right about that, with me committing to Michigan and going to the best school in the country. That’s probably the best advice I’ve been given.

Related Items:DJ Wilson, Getting to Know