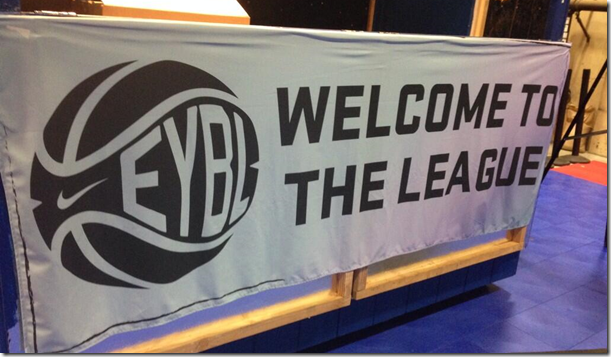 This past weekend marked the only NCAA live period of the spring, which made for a busy weekend for college coaches. This is the only opportunity to make evaluations on the AAU circuit before the July live-period and more importantly, Michigan’s June 15th offer date for class of 2016 prospects.

John Beilein spent the majority of his time in Sacramento for the first session of Nike’s EYBL circuit, but Michigan coaches were spotted across the country including the adidas Uprising in Dallas, Pitt Jam Fest in Pittsburgh, the King James Classic in Ohio and other events across the country.

Here are some notable performers with Michigan connections from the first weekend of EYBL play.

2016 guard Jamal Murray has previously visited Michigan and is drawing praise for his abilities to control the game from the guard spot.

If you are looking for a true point guard who plays smarter than his years, look no further than Murray. Standing at 6-foot-5 and weighing in at 185 pounds, Murray is one of the most physically-imposing guards on the circuit. The Athlete Institute guard was very steady through four games, averaging 12.2 points, 4.8 rebounds and 3.0 assists. Murray plays with poise similar to former Bounce guard Tyler Ennis, and has the size to be a matchup problem for most defenses. Through one EYBL session, it is easy to see why scouts are clamoring over his potential.

Austin Grandstaff averaged 20.5 points per game during the first weekend of the Nike EYBL as John Beilein looked on in Sacramento. On Monday night, Grandstaff talked with Beilein on the phone and started working on scheduling a Michigan visit.

Grandstaff is set to visit Ohio State this coming weekend. Grandstaff impressed many scouts while he was in Sacramento, including Rivals.

Rivals150 prospects Austin Grandstaff and Jawun Evans had solid performances in a losing effort for Team Texas. Grandstaff, the nation’s No. 30 prospect, scored a game-high 19 points. Though Grandstaff’s outside shot was a little bit off (he hit only two of 10 from three-point range in the face of strong defensive pressure from Howard Pulley), he converted several nice looks in the paint, including a seven-foot floater after he maneuvered past a defender.

Derryck Thornton Jr. and Tyus Battle are both five-star prospects in the class of 2016 and both players are expected to visit Michigan on June 7th for Michigan’s College Practice Camp.

The Michigan visit is almost certain to be followed up with an offer on June 15th, the first day that Michigan offers class of 2016 prospects, for both prospects. Thornton is also hearing from Florida, Arizona, USC, Vanderbilt, Missouri and UNLV. Battle recently added offers from Wake Forest and Maryland.

Austin Hatch took his official visit to Ann Arbor last week. Hatch was hosted by Spike Albrecht and tweeted that he had a great time.

Thank you @SpikeAlbrecht for being a great host as well. It's going to be a amazing four years in Ann Arbor! #GoBlue

Hatch committed to Michigan on June 15th, 2011 before surviving the second tragic plane crash of his life weeks later. His high school play has been limited, but he did return to the court for spot action with Loyola (CA) this season. Beilein reported recently that Hatch would be on an athletic scholarship at Michigan.

Keeping tabs on other prospects

Was trying to think of who Matt Moyer reminded me of yesterday – finally clicked. He has a lot of Mike Moser in him. #PittJamFest

Derek Funderburk – ’16 PF Cleveland St. Edward: While Ward used physicality to score around the rim on Sunday, it was Funderburk’s athleticism and effort that helped the agile 6’9 power forward get buckets on the interior. One of Ohio’s most promising young big men, coaches from Ohio State, Michigan State, Michigan and Xavier were among those who checked out the King James forward as he helped lead his team to the 16u crown. A high energy forward who can do more than just score, Funderburk is getting more and more physical by the day; as he continues to add strength to his combination of instincts, height, athleticism and skill-set, this kid has a chance to be an absolutely special prospect in Ohio’s loaded 2016 class.

Michigan was also on hand to watch class of 2015 guard PJ Dozier. Dozier is hearing from Michigan and a host of other high-majors despite missing his junior season due to injury.

“The injury opened up my eyes in the recruitment process as those schools still came despite my situation,” Dozier told Rivals.com.

For Dozier – a 2015 shooting guard from the Upward Stars (DC) – his stock may have dropped, but he is getting back into shape and form. Getting his feel of the game back and shaking off the cobwebs, the No. 49 player in the Rivals150 played the floor general role and made plays with his long wingspan. He shot the ball well from long range, but not great, and needed more consistency to his play. Despite the rust, the stakes are high for him.

Clemson, South Carolina, Michigan, Ohio State, Indiana, Georgetown and North Carolina have been pursuing the hardest and were in to watch Dozier at one point or another on Friday and Saturday other than Indiana. Open to all schools at this point, loyalty could play a big factor after the injury. As Roy Williams will be in to see Dozier on Sunday, it will be interesting to see if he can keep the South Carolina native in the Carolinas.