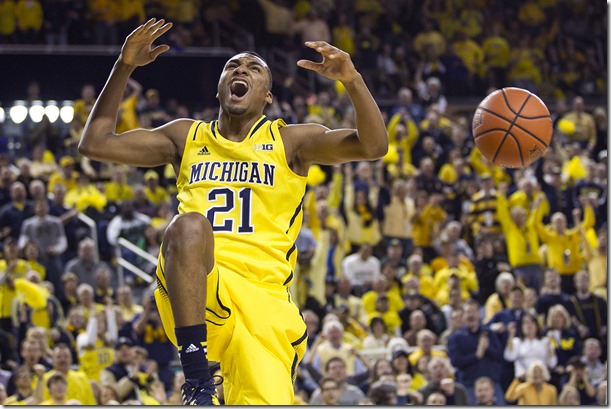 When Michigan needed points in a hurry this season, Zak Irvin was the man springing to action off the bench. The talented freshman was Michigan’s very own version of “the microwave,” providing instant 3-pointers on demand. Irvin’s unorthodox delivery combined with his length and elevation made for a nearly unblockable perimeter jumper he could get off over just about anyone.

And that is truly the story of Zak Irvin’s season. The Indianapolis native was the inverse of the cliche of the ‘not just a shooter’ cliché spouted about Nik Stauskas on nearly every national television broadcast of a Michigan game. Irvin was truly “just a shooter” — and while he was extremely good in that role, he left something to be desired in other areas of the game.

This is only the beginning for Zak Irvin. He displayed a diverse set of offensive skills in high school and was known as a lockdown defender. In all likelihood, Irvin will develop in those departments as his career goes on. This year, he was stunningly one-dimensional — and the perfect fit for a very specific role Michigan needed filled.

Quotable: John Beilein, after Michigan’s home win over Nebraska: “He just has the ability to make shots. Truthfully, that ball goes in the air and because his delivery is so unique, it’s like you don’t know what’s going to happen. It’s been going in at 40 percent, so I just close my mouth and say, ‘keep shooting it, Zak.’”

Zak Irvin did what he was asked this season: make shots. He was a prodigal shooter from the start and bailed Michigan out of a few sticky situations with timely shooting. That being said, his game was decidedly one-dimensional and there is plenty of room for improvement. Irvin had a very solid freshman year, and he will be just fine.