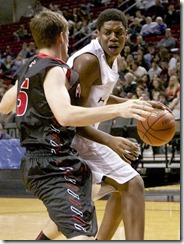 Kameron Chatman is the highest-ranked recruit of Michigan’s 2014 class, coming in as the 26th-ranked player in his class and a consensus four-star. The hype is justified — at 6-foot-8 with a long wingspan, Chatman’s diverse set of skills allow him to play anywhere from the four to the one in John Beilein’s offense. Recruiting sites aren’t the only one’s who’ve taken notice of the Portland native’s talent — Chatman recently played at the prestigious Jordan Brand Classic in Brooklyn and was also invited to try out for the USA Basketball U18 National Team in June. We sat down for an extended interview with Chatman for our Getting to know series on Michigan’s 2014 recruiting class.

So how have you been? Busy since your commitment, it seems.

I been good, just been working out and going to school, playing in the Jordan Brand game. That’s pretty much it.

How was the Jordan Brand Classic?

It was good. I was happy to be selected. It was by far the best thing I’ve ever experienced. Off the court and stuff, it was nice. We got to talk to Michael Jordan. It was a pretty good experience. And it was in New York, so I had a pretty good time.

How do you think you played?

I think I did pretty well. The minutes were short but I think I played pretty well for the time I was in. I wish we could have won, but you know.

Are you excited to play against those guys in college?

You were at an EYBL event in Sacramento recently?

I went to Sacramento with [my former AAU team], I just happened to be down there.

You were staying with DJ Wilson while you were down there, right?

Yeah, I stayed with DJ down in Sacramento.  My dad and his mom talked before, probably a couple months ago. So we planned on going down there and we knew that he lived there in Sacramento. I just stayed with him for a couple days to get to know him and stuff like that.

Did you guys run into John Beilein while you were down there?

Yeah, Coach Beilein and Coach Vall [Jordan]. They both came to the gym and we had some conversations with them and stuff like that. It was a good trip.

Michigan’s had a few guys jump to the NBA this offseason, leaving some opportunities for you guys coming in. Is it exciting to enter that sort of situation?

Yeah, definitely. Everybody wants to play. Just having that option of being able to take up minutes is always exciting. I’m excited to get in there and produce.

When you see guys go from Michigan to the NBA, does it sort of remind you of one of the reasons you chose Michigan in the first place?

Definitely. That’s probably the most important thing after high school: getting better. Seeing them produce over and over for the past three years, and then winning also, and the system coach Beilein has and how he coaches, that was definitely one of the reasons why I chose Michigan.

You’re projected as a guy who can play the one through the four. Are you most comfortable at any particular position?

Have you been keeping in contact with the coaching staff?

I’ve been talking to everybody. Coach Beilein, Coach Vall, Coach BA [Bacari Alexander]. I’m really talking to Coach Sanderson right now. He had a conversation with me and my trainer, just giving me workouts so we can have some type of feel for how the summer will be and all that. I’ve been keeping in contact with all the coaches. Coach Meyer too.

What does Coach Sanderson have you doing?

Just like a lot of muscle endurance stuff. I’m working on my eating habits, too. Just tips and stuff like that, not actual full workouts. He can’t really control that right now being in Michigan. but little tips and stuff.

When are you planning on being in Ann Arbor?

I got invited to 18-and-under Team USA, so depending on that — if I don’t make the team, I should be there right before orientation, like the 19th or something like that. But if I do make the team, the USA thing goes all the way to the 24th, so if I make I’ll probably be there around the 24th of June.

Do you know any of the guys who will be trying out for the USA National Team?

Yeah, most of the Jordan Brand guys. I’ll probably see the same guys I see at the [Nike] Skills Academy that I’ve been going to and the Jordan game. It’s probably those same type of guys.

When you watched Michigan in the NCAA tournament this season, were you thinking to yourself what you could have done to help the team?

Who are you pulling for in the NBA playoffs?

Well, right now, I’m in a debate. My favorite player is James Harden, but they’re playing against the Portland Trail Blazers right now. I don’t really know how to go about that series, but right now I think I have to go with the Blazers.

What’s something Michigan fans might not know about you?

I would say probably that I really like shoes. And I’m really funny. When I get to know people, I’m a comedian. People tell me that.

What activities do you enjoy off the court?

Do you listen to any particular music before games?

What’s your best sport other than basketball?

I used to play football and baseball. I would say I had fun playing football. Football was probably the most fun outside of basketball.

Are there any NBA players whose game is similar to yours?

I don’t think NBA-wise. I have a different kind of playing mentality. People used to compare me to Lamar Odom a lot. To me, I would say I do play like him because when I do see him he fits my game, but I wouldn’t say exactly how I play or how I want to play.

Any idea what you’ll be studying at Michigan?

Who’s been an inspiration to you in your basketball career?

It was actually recent. It was actually from Michael Jordan. We had a Q&A with him. And somebody asked him how he prepared before games. He told told us that he didn’t prepare. During practice, he would go so hard, and do everything correctly and try to be perfect to the point where, when it came to the game, it was just natural. He didn’t have to prepare. It was just basically a show he was about to put on.