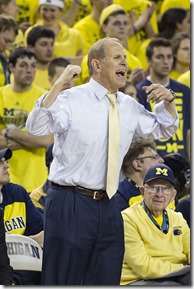 Michigan will host Syracuse in the 2014 Big Ten-ACC Challenge.

Michigan and Syracuse will play on Tuesday, December 2nd at the Crisler Center. Times and television information for the Big Ten-ACC Challenge will be released at a later date.

Michigan last played Syracuse in the 2013 Final Four in Atlanta, GA. The Wolverines beat the Orange 61-56 to advance to the National Championship game. John Beilein is 1-9 career against Syracuse Jim Boeheim.

The Wolverines will also travel to Arizona and play in the 2014 Legends Classic featuring Villanova, VCU and Oregon at the Barclays Center in Brooklyn, NY. A full run down of future scheduled dates can be found here.

Full listing of Big Ten-ACC Challenge matchups after the jump.

No. 21 Syracuse at No. 24 Michigan
Ohio State at No. 8 Louisville
Pittsburgh at Indiana
NC State at Purdue
Illinois at Miami (Fla.)
Minnesota at Wake Forest

No. 2 Duke at No. 4 Wisconsin
No. 18 Michigan State at Notre Dame
No. 25 Iowa at No. 6 North Carolina
No. 7 Virginia at Maryland
Georgia Tech at Northwestern
Virginia Tech at Penn State