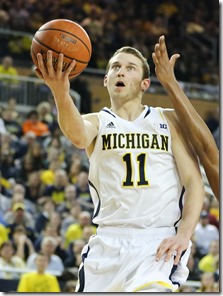 Nik Stauskas, Glenn Robinson III and Mitch McGary have all moved on from Michigan, but they have an important month and a half ahead to prepare for the NBA Draft.

The NBA Draft Combine runs May 14th through 18th in Chicago and will be the first big test to rise up NBA draft boards before the June 26th draft. The upcoming month will also be filled with workouts at team facilities and seemingly endless rumors about prospects that are rising or falling. Here’s the latest on Stauskas, Robinson and McGary’s NBA stock. (Photo: Dustin Johnston)

Nik Stauskas signed with Mark Bartelstein for representation and is working out in Chicago with Priority Sports. His roommate is none other than Michigan State big man Adreian Payne – who really likes bologna and cheese sandwiches. Stauskas will throw out the first pitch at the Tigers game on Monday.

Stauskas is projected almost unanimously as a top-15 pick.

DraftExpress compiled one of their always worthwhile scouting videos on Stauskas’s game late in the season.

“Stauskas seems to be garnering more and more buzz of late,” ESPN’s Chad Ford wrote. “His abilities as a shooter with deep range and a quick release are unquestioned. It’s his ability to also play a little point guard that has moved him into the lottery. This is the highest he has been ranked on our Big Board, and I don’t think it’s out of the question that he could go even higher when all is said and done. The Sixers, Nuggets, Wolves and Suns are all options in the lottery.”

McGary also signed with Mark Bartelstein for representation and remains on the edge of the first and second round. He’ll be rooming with Creighton forward Doug McDermott in predraft workouts in Chicago. ESPN’s Jeff Goodman and SI’s Chris Mannix both project McGary as a late first-rounder but other outlets have him going early in the second.

“First of all, it shows he’s a very honest guy,” Stauskas told MLive.com. “He’s true to his word. He wanted (the news) to come from him and not end up getting out later down the road from a media source and having to explain himself later on. I think he wanted the world to know it from him.”

“No, not really, because you know what, probably 70 percent of the league does that (smokes marijuana),” the scout told MLive, speaking on the condition of anonymity.

“It’s not like he’s a kid with a bad attitude,” the scout said. “If it was a kid that was a malcontent and changed schools a lot, then it would be another (issue), but I don’t think this is that big of a deal.”

Robinson will be represented by Austin Brown, who is also representing Gary Harris. Robinson is projected in the same range where he was before he declared: late first or early second.

“Robinson has the athleticism and the pedigree, but his play was up and down all season. He’s a natural 4 with the size and body of a 3,” writes Ford. “He’s tried for two years to make the transition to small forward at Michigan, but with only so-so success. When his jumper is falling, he looks like an NBA player. But he shot just 30 percent from 3-point range this season, which is a pretty big issue. He’s all over the place on draft boards. Some teams have him in the 20s. But most have him in the second round.”

The combine could be especially important for Robinson, who has the athletic ability to test very well. The biggest issue for the 6-foot-6 sophomore is going to be whether he can shoot the ball effectively and consistently in team workouts and combine events.