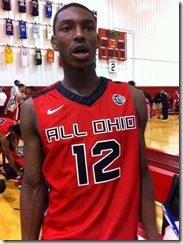 FORT WAYNE, Ind. — Jalen Coleman is playing for his fourth AAU team in four years, but he looked terrific with All-Ohio Red on Saturday at the Spiece Memorial Run-n-Slam over the weekend.

Coleman was comfortable with the ball in his hands, attacking the basket and knocking down perimeter jumpers with ease. The 6-foot-4 guard was arguably the top scorer at the event and he had plenty of opportunity to lead All-Ohio Red. There’s a level of efficiency to his game as he does a great job of playing without the ball in his hands, moving off screens and cutting. He’s also shooting the ball as consistently as he ever has on the AAU circuit.

Despite having his playing time reduced in a number of easy blowouts, Coleman still had 23, 17, 16 and 15 point performances in Fort Wayne.

Not much has changed with Coleman’s recruitment and Michigan remains in the thick of things along with a handful of other Midwestern schools that have been involved consistently: Michigan State, Notre Dame, Indiana, Purdue, and Illinois.

Coleman’s teammate, Esa Ahmad, is also hearing from Michigan. The Shaker Heights native is a versatile four-man that can play on the perimeter or with his back to the basket and he hopes to setup a Michigan visit in the coming weeks.

All-Ohio Red fell to Coleman’s old AAU team, Spiece Indy Heat, on Sunday morning in the 17U quarterfinals, but will be in action against next weekend at the Nike EYBL Dallas.

Here are some highlights of Coleman in action from earlier this spring at the Real Deal in the Rock.

AJ Turner fell off the radar a bit when he transferred to New Hampton and reclassified to 2015, but the 6-foot-6 guard has improved his game significantly in the year away from Michigan. Turner was a late arrival to the tournament, missing Friday night due to travel issues, but he exploded for 30 points in a narrow win over the Mac Irvin Fire on Saturday afternoon.

Turner had his jump shot clicking from all over the floor, knocking down five triples on the game. Turner looked more comfortable, aggressive and active than he has at any point in his career.

This has been a huge spring for the Michigan native, who was also impressive in Sacamento, leading The Family with 10.8 points per game in the first weekend of Nike EYBL play.

John Beilein has remained in contact with the sharpshooting wing during his time at New Hampton and he should be poised for a big spring. He’s also developed a close relationship with recent Michigan commit Aubrey Dawkins.

Jalen Brunson sat out the Spiece Run-n-Slam in Fort Wayne this weekend, but he trimmed his list to eight schools on Saturday.

Brunson is one of just two players in the class of 2015 with a Michigan offer. He averaged 26.1 points, 5.4 rebounds, 4.7 assists and 2.9 steals per game last season, leading Stevenson to a third-place finish in the Class 4A tournament.

Watch for much more coverage from Spiece in the days to come.