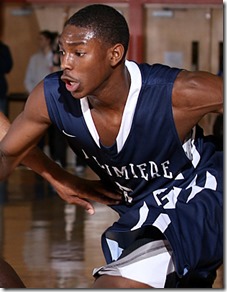 Coleman has taken all of the adjustments and changes in stride and thinks it will prepare him for an even more important transition next summer: adjusting to life in college.

“I adjusted to [being away at La Lumiere]. It’s just like college,” Coleman said after an All-Ohio Red win at the Spiece Memorial Run-n-Slam. “And that’s the reason I went down there, to make the transition from high school to college easier.”

While adjusting to life away from home is important, the competition that Coleman has faced has also increased. La Lumiere played against prep school power houses across the country and finished the season ranked 15th nationally by IndiHoops.com

“It’s a higher level,” Coleman said of playing at La Lumiere. “You’re playing against the best in the country, playing against similar sized people. It’s supposed to be like college and it’s the most similar you can get to college. It was a good transition for me and it made it a little more difficult, but that’s the reason I went down there,”

Coleman’s transition to All-Ohio Red has also come with increased competition. All-Ohio Red plays on the Nike EYBL circuit, the top circuit in summer basketball. He hit the ground running in Sacramento, averaging 11.3 points per game and helping All-Ohio Red to a 2-1 record. Judging by his performance in Fort Wayne, he’s playing some of the best basketball of his career.

For all the changes on the court, there have been very few changes in Coleman’s recruitment over the last year. Michigan offered Coleman on June 17th of last season and has been a critical player in his recruitment ever since. But Coleman hasn’t trimmed his listed, named a leader or even taken many visits.

He didn’t name a leader, a top group or even mention that any schools are recruiting him harder than others. He would only admit that Notre Dame might be in to see him a little more often because they are the closest to La Lumiere. He praised other schools, but was careful not to show his hand. Coleman also reiterated that he doesn’t have a game plan and he’s not sure when he’ll make a decision.

“No I don’t have a timeline. I haven’t had time to go home and go over everything with my parents.”

He is expecting that meeting with his family to happen soon, but until it does there’s little to report.

Michigan has made an impact and should be involved until the very end. The 6-foot-4 scorer was most impressed with Michigan’s player development.

“I talk to Michigan a lot,” Coleman reiterated. “It’s a great school and I feel like that would be an easy transition just because of the great academics, great basketball and player development.

“Things have been great at that school for the past five years, ten years. Statistics wise they’ve showed that they improve – in all aspects – and I like that.”

Michigan’s coaching staff has worked wonders with guards and have built their image on turning undervalued recruits into pros. Trey Burke, Nik Stauskas and Tim Hardaway Jr. all fit the bill and Caris LeVert appears to be next in line.

“Seeing the floor better, IQ and things like that,” he said. “I’m still working on everything and staying consistent with my shot.”

It’s not always easy for players to progress after they emerge on the national radar, but Coleman seems to be doing just fine. His development from scorer to playmaker was evident when watching him over the weekend in Fort Wayne. As the go-to guy in All-Ohio Red’s offense, Coleman didn’t force the issue. He shot the ball very well, but was quick to distribute when scoring options weren’t in front of him.