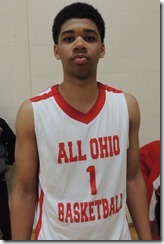 FORT WAYNE, Ind. — Esa Ahmad is one of the fastest rising prospects on the spring AAU circuit.

Given that Ahmad had just handful of high-major offers before the start of his junior season, it’s safe to say that his recruitment is blowing up. The process and attention has been overwhelming at times, but Ahmad is taking things in stride.

“It’s been good,” Ahmad said of all the recent attention. “You’ve gotta learn how to handle it, overall it’s been a great process.

“I got offered by Ohio State recently, so it was a good weekend for me.”

Ahmad led All-Ohio Red in scoring in Sacramento at the Nike EYBL, averaging 13.3 points and 9.7 rebounds per game, and continued his strong play at Spiece in Fort Wayne over the weekend. He was offered by Ohio State on an official visit to Columbus earlier last week.

He admitted the Ohio State offer was important to him.

“Growing up watching Ohio State, it definitely means a lot to get that offer,” he said.

But Ahmad was also quick to reiterate that he doesn’t have any top schools quite yet.

“Everybody’s big in my recruitment,” he said before rattling off a couple notable schools on his list. “Iowa State, Iowa, Indiana, Ohio State, West Virginia and a few more.”

Michigan has also been playing close attention to Ahmad and there’s some mutual interest.

“I haven’t talked to [Michigan] personally,” Ahmad explained. “But my dad has been in contact with them. We plan on making a visit a soon… in the next couple of weeks.”

Ahmad also hopes to take trips to Michigan State, West Virginia, Iowa and Iowa State in the coming month or so. Despite his Ohio ties and the fact that the Buckeyes just extended an offer, Ahmad had good things to say about the Wolverines as well.

“I like Michigan,” he said. “We had an [All-Ohio Red] alum, Trey Burke, go to Michigan and I’ve been keeping up with them.”

For now, he’s focusing on his game and trying to improve before the July evaluation period.

“[I’m trying to work on] my playmaking abilities,” he said. “Creating for my teammates and doing whatever the team needs me to do.”

The recipe is working so far and Michigan is likely to continue track Ahmad closely this July as he plays alongside Wolverine offer Jalen Coleman.