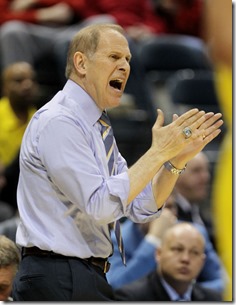 John Beilein spoke with some of the media at the Bob Ufer Quarterback Club dinner on Monday evening. Beilein spoke on a number of topics, including the fact that the Wolverines might still be open to adding to their 2014 recruiting class.

“We’re never done, we’ll look at this last one that we might have and be very judicious with it,” Beilein told MLive. “We’ll see where it goes, because it could be coming into ’15 right away, or ’16.”

If the Wolverines do add to the class, it likely won’t be in the frontcourt. Michigan and Cole Huff went their separate ways (Huff committed to Creighton) and Beilein said that Michigan is happy with its current frontcourt options.

“We’re going to have two freshmen between Ricky (Doyle) and Mark Donnal, and Max (Bielfeldt) obviously has a lot of experience just at least in practice so we said that’s it, we’ll go with that and decide in ’15 or ’16 what’s the best year to bring in another big man,” Beilein told The Detroit Free Press.

The top target available on the board might be Eron Harris, a sophomore transfer from West Virginia. Harris averaged 17.2 points per game for West Virginia last season. He would have to sit out a year before having two years of eligibility remaining.

Harris was not expected to be formally released from West Virginia until the end of the semester, but that should happen soon. West Virginia wrapped up their final exams on Saturday. Schools are not allowed to make contact with a transfer until they’ve been officially released.

Harris is ranked in the top 10% nationally in pick-and-roll and isolation scoring and touts a 63% effective field goal percentage when shooting in ball screen situations, per Synergy Sports. He shot 42% from three-point range last season and is a capable shooter off the bounce and the catch.

Nik Stauskas had the opportunity to throw out the first pitch before the Tigers faced the Astros at Comerica Park on Monday evening. He did a pretty good job for someone that claims to have never thrown a baseball.

Afterward Stauskas told reporters that he “lives for the lights”.

Stauskas also reported that Zak Irvin and Derrick Walton were planning on sticking around in Ann Arbor all summer to participate in the same workout plan that Stauskas and Caris LeVert participated in last season.

Per Nik Stauskas, Derrick Walton Jr. & Zak Irvin are spending the summer at U-M to undergo same program he and Caris Levert did last summer.

Stauskas and LeVert were two of the most improved players in college basketball last season and Stauskas is confident that Walton and Irvin are capable of making a similar jump.

“If they can make those same types of improvements,” Stauskas explained to MLive’s Brendan Quinn. “Then I think the sky is the limit for this team coming back.”

“When (Walton Jr) gets really comfortable,” Stauskas elaborated. “I think he can be one of the best point guards in the Big Ten, maybe even the country.”

Beilein discussed the value of staying around on campus for both semesters when he met with the media early in April.

“There’s been a major push from guys who want to be here the whole summer,” Beilein said. “I expect many of our guys will be there. But I don’t have all the numbers. We’re not saying we want people to come back for both summer sessions. We definitely want them for one. We do want them only taking 12 hours a year as a rule, and that way they can continue that and graduate on time. It’s going to be completely up to them for that first session. Because I think there’s a time to go home as well. … I don’t have a number on that. All I know is it really paid off for Caris and Nik. But it was their choice to do that, and that’s what’s important.”

Michigan will also travel to Italy in August for its foreign tour, an event that will include the incoming freshmen. Freshmen are scheduled to arrive on campus in June and Kameron Chatman will be trying out for the USA Basketball U18 team in June as well.

Beilein also reported that Michigan is still looking to add to its schedule for next season. The Wolverines are already slotted to travel to Arizona, play two games in Brooklyn against VCU, Villanova or Oregon and host Syracuse for the Big Ten-ACC Challenge. Despite having a team that will be comprised predominantly of underclassmen, Beilein still wants to add a marquee home-and-home.

“What we’re trying to do is have two BCS home and away every year if we can,” Beilein explained. “That’s sort of the plan, but we’re not there yet.”

Texas targets off the board

John Beilein flew down to meet with Texas wing guards Austin Grandstaff and Matt McQuaid before the April evaluation period two weeks ago. He also spent time during the evaluation period watching the duo at the Nike EYBL event in Sacramento.

Afterward there was talk that Austin Grandstaff was working on scheduling an official visit to Michigan, but he took an official to Ohio State first. That visit resulted in a commitment and Grandstaff is off the board.

24 hours later Grandstaff’s teammate was off the board as well. McQuaid committed to Larry Brown and SMU. McQuaid had previously spoken favorably about Michigan, but no visit had been setup.