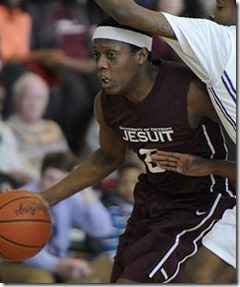 FORT WAYNE, Ind. — A year ago, four-star guard Cassius Winston was one of the top performers at Michigan’s College Practice Camp in June. He followed that up with a strong summer and an even better high school season. Winston averaged 18.4 points, nine assists, seven rebounds and four steals while leading Jesuit to the Breslin Center as a sophomore and he shot 59-percent from the floor.

Winston, the 247Sports Composite No. 29 player in the class of 2016, continues to reiterate what most in the state already knew: he’s the best point guard in the state of Michigan.

Michigan State has already offered Winston and a Michigan offer is expected to come sooner than later. He relayed that he expects to receive an offer from the Wolverines before he goes back to school next year.

“I’m pretty sure, if I know correctly, that I’ll be offered by the end of the summer,” Winston said on Saturday at the Spiece Memorial Run-n-Slam.

The Wolverines are selling Winston on the opportunity to run the team from the point guard position. An opportunity that worked out pretty well for Trey Burke and Darius Morris.

“They want me to come in and win basketball games,” Winston said. “Run a lot of ball screens and they want to play through me.”

Winston is a prototypical lead guard who excels with the ball in his hands. He has a tremendous feel for the pick-and-roll, but also understands the game at a higher level. He knows when his team needs him to attack the basket, or when it’s better to take a step back and distribute the ball.

Michigan needs a point guard that can handle ball screens, but Winston wants to find a team that will let him play his game as well.

“[Michigan is a] guard oriented team,” Winston replied when asked what he liked about the Wolverines. “They run a lot of ball screens and they play through their guards a lot.”

Winston has proven that he can dominate a high school game, the next step is making sure he’s ready for college. The Detroit native’s offseason workouts have been devoted to finishing at the rim.

“Strength and speed,” Winston replied when asked what he’s focused on improving. “I’m trying to be more explosive so I can finish better around the basket.”

Winston reported that Iowa State, Michigan, Ohio State and Michigan State are recruiting him the hardest right now. He discussed his four primary suitors after a win at the Spiece Memorial Run-n-Slam in Fort Wayne over the weekend.

Iowa State has landed a number of Michigan natives in recent years including Sherron Dorsey-Walker, Monte Morris and Percy Gibson. That’s something that Winston has taken notice of and the Cyclones are very involved in his recruitment.

“[Iowa State is] a great guard school, they get their guards involved and win a lot of games.”

Michigan State might not have a guard oriented offense, but Winston still likes the Spartans for other reasons.

“I like the toughness they play on the defensive end and the griminess of the program,” he said of Michigan State.

“I just like the coaching staff, everybody there is cool and they win basketball games.”

Winston has visited Michigan, Michigan State and Ohio State already and reported that he doesn’t have any visits scheduled right now, choosing instead to focus more on developing his game on the court.