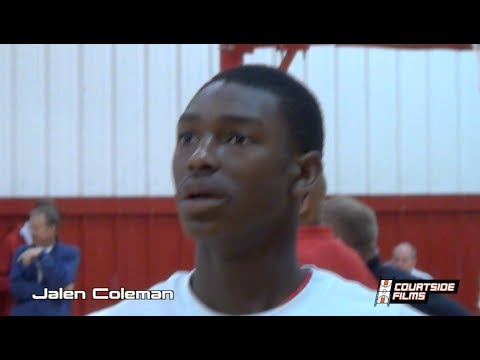 A number of Michigan prospects were in action at the 2014 Spiece Run-n-Slam Classic in Fort Wayne, Ind. over the weekend and UM Hoops was in attendance to catch the action. Here’s a rundown and evaluation of notable Michigan prospects in attendance. For more recruiting updates from Fort Wayne, check out our previously published articles from Spiece.

Coleman is a flat out scorer. His game is smooth, he moves off the ball and does a great job of shooting off of screens. He was the featured perimeter threat for All-Ohio Red and he didn’t disappoint. He’s not an elite athlete, but he’s plenty quick enough and does a good job of finishing at the basket.

After one blow out win for All-Ohio Red, Coleman’s teammate was going up to the scorers table to ask how many points he scored. Coleman followed him, but had a different question. He wanted to know how many assists he had. Unfortunately, assists aren’t kept on the sidelines at AAU events, but the mindset in Coleman’s game is clear. He passed the ball very well all weekend and was surprisingly adept at reading ball screens. He’s getting plenty of shots, but he doesn’t force the issue like so many other guards on the summer circuit. He’ll hit the cutter or the roll man with a pass when the option is there, but he doesn’t hesitate to shoot when he’s open. That sort of maturity bodes well for his future as a high-major off guard.

Winston controls the game like any great point guard should. He’s forced to play off the ball at times for The Family, but he’s clearly a point guard first and foremost. He does a terrific job of running ball screens and making the right reads. He’s a knock down shooter when left open, off the catch or off the bounce, and he’s aggressive attacking the basket. Winston needs to add some strength to finish at the rim, but he continues to develop in the right direction.

Swanigan is a load in the low post. He plays below the rim, but he can move people with such ease that it’s just unfair. He plays up at the 17U level, but that doesn’t bother him in the slightest. His soft hands and quick feet are two of his most impressive attributes, but he’s also surprisingly skilled offensively. He complements Michigan State commitment Deyonta Davis almost perfectly in the post. Swanigan pushes people around in the paint while Davis skies above the rim. Swanigan’s body is improving as he looks quicker than the last time we saw him at Michigan’s College Practice camp.

Ahmad is an intriguing prospect at 6-foot-7. He plays the four for All-Ohio Red and can do a bit of everything from that spot. He knocked down perimeter jump shots, put the ball on the deck, crashed the glass and played with his back to the basket. He’s not an overwhelming athlete, but he moves well and has good length. His playmaking skills are a work in process – he tended to over-dribble himself into trouble and got caught a few times, usually turning the ball over. But he thrived finishing around the basket and blocked a number of shots. Overall, he has a lot of the skills that you want to see from a stretch four, but he’s not afraid to do the dirty work in the paint either.

Turner is a shooter with size at 6-foot-6. He looked more aggressive than he has in the past and he moved very well without the ball. He’s still very skinny, but he wasn’t afraid to mix it up on the glass and grabbed some tough rebounds. He has great size for the position, but needs to continue developing his ball handling skills and creating more offense off the bounce for himself and others. Expect his offer sheet to grow significantly by the end of July and for Michigan to continue to track his progress.

Davis has always wanted to be known as a point guard, but he still has the game of an off-guard in a point guard’s body. He’s not a bad passer or a selfish player, but he’s at his best when he controls the ball and looks for his own offense. Davis is capable of creating off the dribble and has a great pull-up jumper, but he was somewhat inconsistent in Fort Wayne over the weekend. He’ll be a scorer wherever he ends up at the next level, but he probably will never be the most efficient player.

Bowen is going to be a star in the 2017 class and looks well on his way toward five-star status. He’s pushing 6-foot-7 and can do a little bit of everything despite his young age. He knocked down jumpers, crashed the glass, blocked shots and even handled the ball quite a bit for The Family. The most impressive play I saw him make was a quick crossover dribble at the free throw line followed by a strong finish at the rim in traffic — and he was doing all of this while playing up at the 16U level.

We didn’t get a chance to watch Seth Towns and Matt Moyer in person due to scheduling, but we’ve loved both players’ games in the past. Towns is a stretch-four with a smooth jump shot while Moyer is a high energy athlete. Both prospects have strong mutual interest.  Illinois Wolves big man Barret Benson has lost some baby fat and looks to have grown a bit since the last time I saw him at Michigan’s College Practice Camp. He’s a solid prospect that’s clearly still growing into his body a bit. He has a lot of raw potential and has been starting to put things together this spring. 2016 big man Al Eichelberger played very well with the Family, he has a big body and isn’t afraid to bang in the paint. Class of 2016 Skyler Nash is a potential Big Ten-level wing guard prospect that has been on Michigan’s radar for some time, he had a solid weekend in Fort Wayne for the Illinois Wolves.